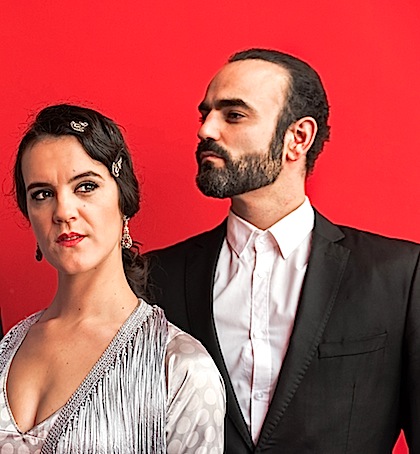 Washington, D.C. – GALA’s continues its 41st season with the twelfth international Fuego Flamenco Festival that brings leading flamenco artists from Spain and the United States to Washington audiences. Recognized for the presentation of stellar artists in an intimate tablao setting, the festival will run from November 4 through November 13 at the GALA Theatre, 3333 14th Street, NW, one block from the Columbia Heights metro station on the Green/Yellow lines. Parking is available behind the theater at the Giant Food garage for a rate of $4 with validation at GALA.

Fuego Flamenco XII, with Honorary Producers Lynne and Joseph Horning, is an exploration of traditional flamenco and its breadth and diversity through contemporary expressions. This year’s program includes the world premiere of Salvador, an autobiographical piece by Edwin Aparicio that traces his journey from war-torn El Salvador to his discovery of flamenco in the United States featuring the Flamenco Aparicio Dance Company and special guest artists from The Washington Ballet, the United States, and Spain, and the Washington premiere of The Silences of the Dance choreographed by Francisco Hidalgo and performed by his company with the Fundación Conservatorio Flamenco Casa Patas of Madrid.

The festival program will also include Flamenco en Familia, free interactive demonstrations of various aspects of flamenco for children and families, led by members of the Spanish Dance Society; and Student Matinee performances by the Flamenco Aparicio Dance Company. The student matinee performances will be on November 1, November 2, and November 3 at 10:30 am. For more information about the student matinees, call 202-234-7174 or email education@galatheatre.org.

The festival is made possible with generous support from Lynne and Joseph Horning, the Horning Family Fund of the Community Foundation for the National Capital Region, the Embassy of Spain in Washington, D.C., SPAIN arts & culture, and the D.C. Commission on the Arts and Humanities.

Fuego Flamenco XII opens with Salvador, choreographed by Edwin Aparicio, curator of the festival since its inception and founder of the Aparicio Flamenco Dance Company, and directed by Mr. Aparicio and Aleksey Kulikov. Mr. Aparicio leads his talented troupe in this moving piece about migration and his personal salvation through flamenco against all odds. Performances are on Friday, November 4 and Saturday, November 5 at 8 pm and Sunday, November 6 at 2 pm. 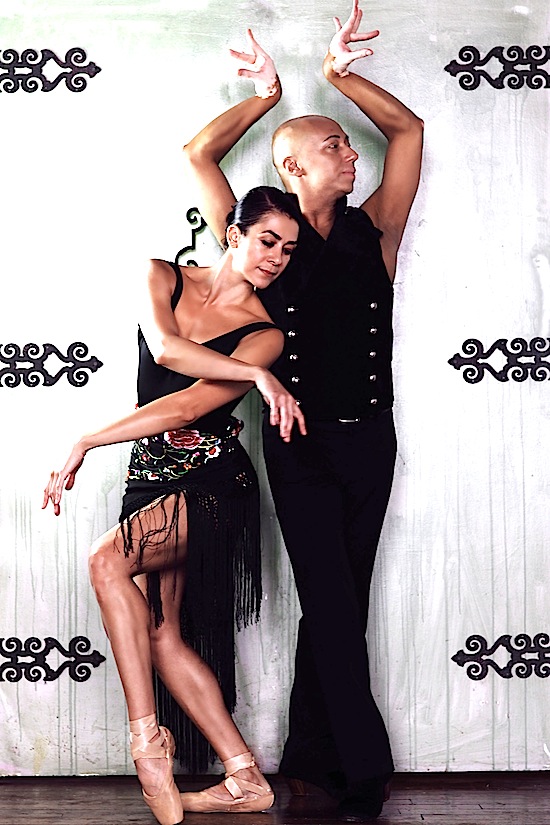 Edwin Aparicio (Choreographer, Co-Director, Dancer) is one of the most sought-after flamenco performers, instructors and choreographers in the United States and Latin America. Described by critics as “the most amazing dancer seen in years,” having “hellfire footwork” and choreographies with “beautiful, evocative imagery”, he trained with world renowned flamenco artists Tomás de Madrid and La Tati and debuted at the legendary Casa Patas in Madrid in 2001.

Mr. Aparicio also performed with The Washington National Opera at the Kennedy Center in El Gato Montés (1997) and in Don Giovanni (2003) under the direction of Plácido Domingo, and in Carmen (2015); and performed with the Washington Ballet in Hemmingway’s The Sun Also Rises (2013). He has appeared as a soloist throughout the United States with ensembles such as the José Greco Spanish Dance Company; and shared the stage with such internationally celebrated artists as Elena Andújar, Carmela Greco, Pastora Galván, La Tati, Ana Martinez, and José Luis Rodríguez. 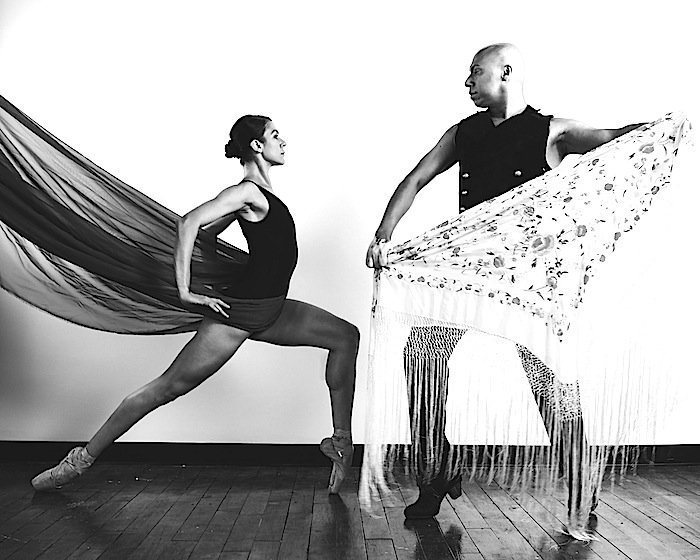 Mr. Aparicio is the artistic director and choreographer of eleven acclaimed productions, including Íntimo with Carmela Greco, which was presented in Washington, DC, Philadelphia, Chicago, Pittsburgh, and Portland, OR; Entresueño, which marked his New York City debut as a company director; and Flamenco Flamenco, which was also presented at the Instituto Cervantes in Chicago. He is a co-founder and a featured performer of GALA’s annual Fuego Flamenco Festival, and is on the faculty of the Washington School of Ballet. Mr. Aparicio was named one of “25 Dancers to Watch” by Dance Magazine in 2009; received a 2012 Protagonista Award from GALA for his artistic achievements and contributions to the Latino community; and the Cross of the Order of Civil Merit, bestowed by the King Felipe VI of Spain in 2015.

Aleksey Kulikov (Co-Director) began studying dance at the age of nine in Kiev, Ukraine. Trained in ballroom dance, he competed semi-professionally and performed with a children’s ballroom dance theater until his emigration to the United States in 1996. Soon thereafter, he studied flamenco with Natalia Monteleón and traveled to Spain, where he studied in Granada with “La Presy” and in Seville with José Galván. He also studied with “La Tati,” Carmela Greco, Manuel Liñán, Domingo Ortega, and Edwin Aparicio. Mr. Kulikov has performed flamenco at various venues in the D.C. area, including Kennedy Center’s Millennium Stage and in Yerma and Edwin Aparicio’s Flamenco Deconstructed at GALA. Together with his husband Edwin Aparicio, he co-directed One Plus One (2013) and Flamenco Men II (2015).

Norberto Chamizo (Principal Dancer) has performed as a soloist with the Compañía Flamenca Tomás de Madrid, with which he toured extensively throughout Russia, Ukraine, Belarus, and the Baltic States. He also performed in Greece, Italy, Egypt, and Portugal as a soloist with Compañía de Madrid. In 2002, Mr. Chamizo formed his own company debuting with Jaleo, his first work as a director and choreographer. Mr. Chamizo also has performed at the legendary tablaos Casa Patas,Flamenco de ayer y hoy, and Café de Chinitas. He has appeared with Flamenco Aparicio Dance Company in several Fuego Flamenco festivals. Based in Madrid, Mr.Chamizo comes from a family in Granada, and teaches and performs in Spain and Germany.

Genevieve “Genoveva” Guinn (Principal Dancer) studied with renowned flamenco artists such as Cristóbal Reyes, José Maya, Alfonso Losa, and María Juncal in Spain. While in Madrid, she performed at the tablaos Al Andalús and Las Carboneras, was a member of the Compañía María Juncal, and apprenticed for the Gitana Cortés Company under the direction of Joaquín Cortés. As a soloist, she has performed throughout the United States, Spain, Nicaragua, and Mexico and shared the stage with “La Tati,” Carmela Greco, and Genara Cortés. She debuted on Broadway in New York City in 2006; choreographed GALA’s production of Bodas de Sangre in 2007; and taught at the International Dance Conference in Taipei. She is the founder of The Pink Flamenco Dance Studio and Austin Flamenco Academy in Austin.

José Viñas (Principal Dancer) has performed in numerous theaters and tablaos, including La Casa de La Memoria and El Callejón del Embrujo in Seville, and appeared as a guest artist in Falete’s production of Sin Censura. He has also performed and taught flamenco in Saudia Arabia, Argentina, and the Netherlands. Among his honors are second place (2008) and first place (2009) in the National Competition of Cante y Baile Estepona in Malaga; the 2010 Best Young Artist Award at the National Ciudad de Ubrique Flamenco Competition; and first place in the 2015 Carmen Ledesma Competition in Seville. He studied with such distinguished flamenco artists as David Morales, La Moneta, Milagros Menjibar, Rubén Olmo, and Javier Barón, among others, and at the Conservatory of Dance in Malaga and Seville. Originally from La Línea de la Concepción in Cádiz, Spain, he is making his first appearance with the Flamenco Aparicio Dance Company.

Francisco Hidalgo (Choreographer, Director, Dancer) has been praised for his elegance and delicacy of movement, characteristics of the great masters of flamenco. Born in Algodonales, Cádiz (Spain), he began his professional career at age 17. He has performed in such distinguished tablaos as Casa Patas, El Cordobés, Los Gallos, and El Arenal, among others; has appeared in international festivals in England, Germany, France, Italy, Morocco, and the Czech Republic; and has performed at the Teatro de la Zarzuela and Auditorio Conde Duque in Madrid, the Lyle Theater in London, the National Theatre of Japan, various theaters in Paris, and Lincoln Center in New York. He has been a principal dancer with the renowned flamenco singer Miguel Poveda, and has collaborated with Crístina Hoyos and Javier LaTorre. Among his awards are Second Prize at the 2010 International Cante Festival de Las Minas, and Special Mention at the 2002 National Competition of Flamenco Dance/Hospitalet in Barcelona and 2008 Aniya La Gitana de Ronda. He studied with such masters as Manolo Marín, Pilar Ortega, Alejandro Granados, Manuel Betanzos, Israel Galván, Antonio Canales, Isabel Bayón, and Rafaela Carrasco, among others.

Lucía de Miguel is a dancer and choreographer who has appeared at prominent tablaos such as Casa Patas, Las Carboneras, Las Tablas, and Café de Chinitas in Madrid and Tablao de Carmen and Los Tarantos in Barcelona. She is a member of Estuaria, an all female company that she created with other young artists, which has toured internationally with several productions. She received First Prize in the Granada Young Flamenco Artists Competition and as a member of Estuaria was a semifinalist in the Spanish Dance and Flamenco Choreography Competition in Madrid.

Rubén Puertas performed various flamenco companies, including those of María Rosa, Carmen Cantero, Javier García, Rosana Muñoz, and Lola Greco. He also has performed with Marco Flores, Ballet Flamenco de Andalucía, Rafaela Carrasco, and the María Pages Company in several productions. He has a degree in Spanish Dance and Flamenco from the Higher Institute of Dance Comandante Fortea, and has studied with María Vivó, Merche Esmeralda, Carmen “La Talegona”, and María Juncal, among others. 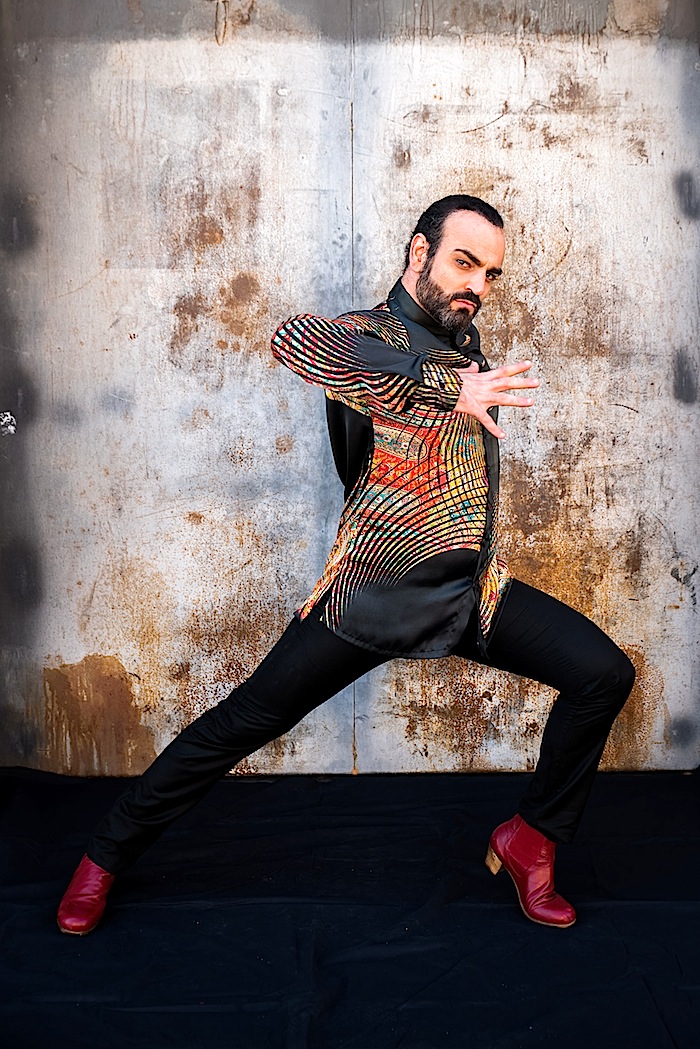 Casas Patas is a world-renowned Madrid tablao, hosting some of the best and most authentic flamenco in Spain. Famous groups and new talent sometimes share the same stage to create memorable productions. The Fundación Conservatorio Flamenco Casa Patas grew out of this club and today sponsors workshops, seminars, and exhibitions promoting the art of flamenco around the world.

Intertwined Identities, a series by Salvadoran painter Nicolas F. Shi, will be exhibited in the GALA lobby during Fuego Flamenco XII. The exhibition features images of Latin American indigenous people who are identifiable through their textiles and whose clothing are similar to those worn by Asian ethnic people and minorities in color and design.

Nicolas F. Shi is a painter who was born in El Salvador to Chinese parents, but left the country to study in the United States. His work mixes the bright colors of Central America with the harmony and simplicity of traditional Chinese painting and the boldness found in contemporary American art. Mr. Shi’s work has been exhibited in China, Japan, Korea, and the United States. A resident of Washington, DC, he has a Masters degree in Architectural Engineering from Oklahoma State University.

Fuego Flamenco XII is on stage at GALA Theatre, 3333 14th Street, NW. Single tickets are $40; Senior Citizen Tickets are $30; and Student Tickets are $25. A Discount Festival Ticket is $60, which includes one ticket for a performance of each of the presentations. For more information and to purchase tickets, call 202-234-7174 or visit www.galatheatre.org.