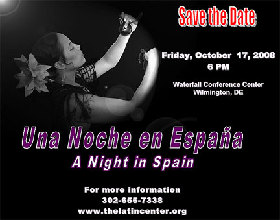 Wilmington, DE – Guests at the Latin American Community Center’s 2008 Grand Ball will enjoy a unique trip to Spain without ever setting foot in an airport. A Night in Spain is the theme of this year’s Grand Ball, set for Friday, October 17, 2008, at the Waterfall Banquet and Conference Center in Claymont, Delaware. The event will honor State Representative Joseph Miro and his wife, Joanne, an education advocate, and will also raise funds for the Latin Center’s La Fiesta Early Development Center. The night promises an authentic taste of flamenco, a chance for women to show off fancy shawls and mantillas, as well as dancing and dinner with a Spanish flavor.

Organizing the Grand Ball caused some controversy among the planning committee. ‘We want guests to experience the feeling of Spain,’ said Carlos De Los Ramos, a planning committee member, ‘But the question is, ‘Which Spain?’’

A staff member who had spent time in the southern part of the country pressed for costumed ‘gypsies’ telling fortunes and handing out sprigs of rosemary around a fountain. Another employee, who is a native of the Dominican Republic, has family living in Galicia. ‘Because of the strong Celtic influence in that area, we could actually have bagpipes at the Grand Ball,’ de los Ramos stated. Another staff member of Portuguese ancestry advocated for Portugal’s inclusion. Some community members argued against a Night In Spain, due to the harsh Colonial period during which Native Americans were enslaved and Africans kidnapped and taken to Latin America as slaves.

‘But ultimately, Hispanics cannot ignore Spain because Spanish is our language,’ says Maria Matos, the LACC’s executive director. The influence of the language and religion can’t be ignored.

The Latin Center’s Grand Ball, Una Noche en España/ A Night In Spain, is set for Friday, October 17, 2008, at the Waterfall Banquet and Conference Center, Claymont, Delaware. Cocktail hour is at 6 p.m. followed by dinner, an Awards Ceremony and dancing. Featured performers include Flamenco Ole and the Latin band Insaciable. Tickets are $90 each or $1700 for a table of 10. For more information contact Sindy Ortiz, 302-655-7338, ext. 216, Email: sortiz@thelatincenter.org. You can also visit the LACC website at www.thelatincenter.org.