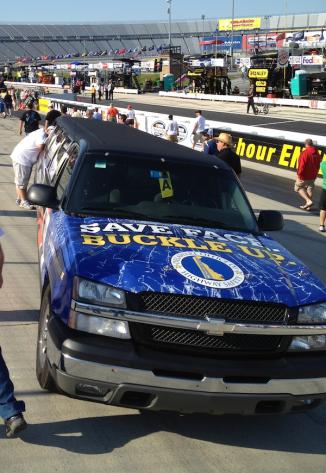 Dover, DE – Over the past two weeks, officers from approximately 17 State, County, and municipal law enforcement agencies issued a total of 1,041 citations to unbuckled motorists during the 11th annual Click It or Ticket campaign. The enforcement portion of the campaign ran from May 14th through 28th and involved traffic safety checkpoints and saturation patrols both day and night.

On Sunday June 10th there was a crash in Dover that left two people seriously injured. They were not buckled up. The incident involved two vehicles. One vehicle, which overturned, had 12 vehicle occupants and only the driver was wearing a seat belt. A four year old female passenger, who was not properly restrained, was ejected from the vehicle. She was flown from the scene by Delaware State Police helicopter and transported to the Children’s Hospital of Philadelphia where she was admitted in critical condition. Another passenger, one year old male, who was also not properly restrained, was flown from the scene by Delaware State Police helicopter. He was transported to the A.I. DuPont Hospital for Children where he was admitted in serious condition. This crash is a good example of how proper use of seat belts may have prevented these serious injuries.

Delaware’s current statewide seat belt usage rate is 90%. OHS officials have begun their evaluation to determine if there has been any increase in the state’s belt usage rate in the last year by conducting a series of observational seat belt surveys at locations throughout Delaware. OHS officials will be surveying motorists on roads throughout the state and recording whether drivers and passengers are wearing seat belts. Motorists on all types of roadways from interstates to two-lane roads will be observed. Survey results should be available by early July.

Even if seat belt use does increase, OHS officials remained concerned about the lack of seat belt use in fatal crashes. Since January 1st, 50% of all drivers and passengers killed in vehicle crashes in the First State were not wearing seat belts. Many of them died in crashes where lives could have been saved if they had just taken a moment to buckle up.

During the Click It or Ticket enforcement period, officers statewide also arrested 13 people for DUI, issued 165 cell phone citations, and cited another 219 drivers for speeding. Additionally, officers issued 57 citations to drivers for child restraint violations, apprehended 31 wanted persons, made 12 drug arrests, 4 felony arrests, and issued 833 citations for a variety of other traffic violations.

Click It or Ticket is a nationwide seat belt enforcement and awareness campaign aimed at saving lives by increasing the number of people who consistently buckle up.

Delaware’s campaign included campaign awareness messages featuring real Delaware Paramedics telling stories of crashes that they have encountered on Delaware roadways where occupants were not buckled up. The messages were aired statewide on radio, internet, TV, print and on billboards. OHS continued their partnerships with Racing Limos of Dover to wrap the hood of a limo with the Click It or Ticket message. OHS also sent seat belt kits to high schools that gave fun ideas and activities for the schools to help teach students about the importance of bucking up such as setting up a faux checkpoint as students leave the school parking lot, and seat belt e-card students could create on Facebook and share with parents and friends. OHS also promoted seat belt safety at Dover International Speedway June 1-3rd with NASCAR driver J.J. Yeley playing seat belt musical chairs with a few lucky fans. All participants of seat belt musical chairs received an OHS Buckle Up t-shirt.

· Did you know that 50% of all occupant fatalities in Delaware last year were individuals not wearing a seat belt and that fewer than 1/3 of Delaware’s unrestrained fatals occur during the daytime.

· Wearing a seat belt decreases your risk of being seriously injured or killed in a crash by approximately 50%.

· Strong seat belt laws protect families. When parents are buckled up, 90% of the time their children are too.