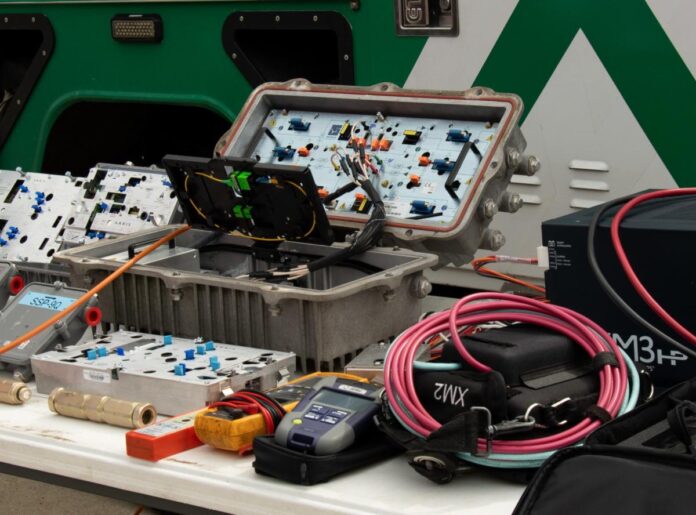 DOVER, Del. – Governor John Carney and State Chief Information Officer Jason Clarke of the Department of Technology and Information (DTI) on Thursday announced $56 million in Broadband Infrastructure Grants to begin making high-speed wired broadband connections available to every Delaware home. The award recipients, Comcast, Verizon and Mediacom, are current State of Delaware service providers with existing broadband infrastructure that responded to a grant application released in October 2021. The three companies will extend their existing coverage areas to serve more than 11,600 Delaware homes and businesses which do not have access to high-speed, wired broadband service. Construction is expected to begin in the next few weeks.

“Stable, high-speed internet connection is important for all Delaware families, students, and businesses,” said Governor Carney. “Now, with the availability of federal funds, we are on our way to giving Delawareans across the state access to connect to school, work, health care, and more. Thank you to the Department of Technology and Information working toward our goal of being the first state to connect every residence and business to broadband internet.”

Delawareans can find out if their area has internet access and report addresses that do not using Delaware’s Broadband Hub (https://gis.broadband.delaware.gov/). DTI plans to update the interactive map with expansion project updates and real-time data. Addresses reported as lacking service during the construction phase will be included within the current project.

“Expanding access to reliable broadband service has long been a priority for Delaware,” said Chief Information Officer of the Delaware Department of Technology and Information Jason Clarke. “Thanks to our ability to leverage funding made available from Congress and the President and with the support of Governor Carney, we are excited to execute on the strategy of our stakeholders and our well-positioned vendor community to close the digital divide in Delaware.”

The Broadband Infrastructure Grants are part of the $110 million commitment to broadband infrastructure Governor Carney announced in August 2021. Funding for this initiative comes from the federal American Rescue Plan Act and Bipartisan Infrastructure Law, both of which were supported by the Delaware congressional delegation – Senator Tom Carper, Senator Chris Coons, and Congresswoman Lisa Blunt Rochester – and signed into law by President Biden.

The grants cover up to 75 percent of the capital construction costs, with the internet service providers contributing a minimum 25 percent match. Selections were made based on an efficient edge-out strategy extending the services of current vendors to close broadband gaps as outlined in the Delaware Broadband Strategic PlanOpen this document with ReadSpeaker docReader. This plan was developed by a diverse group of stakeholders with representation from the public and private sector across the state. Applicants had to be current State of Delaware service providers with existing broadband infrastructure to be eligible for the grant.

“We are thrilled to be given this opportunity to expand Mediacom’s fiber network and increase high-speed broadband access within Delaware,” said Chris Lord, Mediacom’s Director of Government Partnerships. “The staff at the Delaware Department of Technology and Information created an amazingly efficient application process that effectively utilizes public resources to encourage private investment while leveraging existing fiber infrastructure.”

“Verizon is excited to participate in Delaware’s Broadband Infrastructure Grant Program, ” said Tony Lewis, Vice President of Public Policy for Verizon. “This Grant will help Verizon deploy our best in class all-fiber network technology to deliver our flagship Fios Home Internet service — with speeds up to 940 Mbps and no data caps — to roughly 3,000 additional unserved locations. We appreciate the leadership of Governor Carney and the other State officials in quickly and aggressively implementing the federal funding that President Biden and Congress have made available to help close the digital divide. We look forward to a continued partnership with the State for this and future programs that will flow from the Bipartisan Infrastructure Law.”

“We’re proud to partner with the state of Delaware and continue our investment to bring our fiber-rich network and advanced services to residents up and down the state,” said Michael Parker, Senior Vice President of Comcast’s Beltway Region. “This partnership will bolster the hundreds of millions of dollars Comcast has already invested in the state to connect thousands of currently unserved homes to our gigabit speed fiber network. Technology is a powerful driver of innovation, entrepreneurship and economic growth, and we’re committed to helping individuals and communities fully participate in the digital economy.”