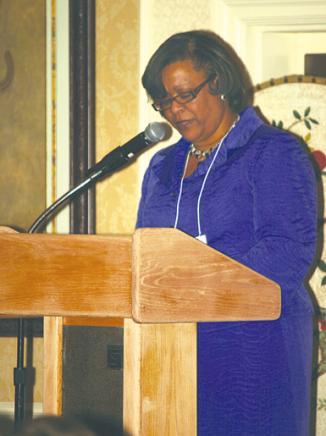 Neda P. Biggs, is the only bilingual immigration attorney working for a non-profit agency on behalf of victims in Delaware, and the Eastern Shore. Her bilingual skills and multi-cultural expertise allow her to effectively advocate for an underrepresented community by providing unprecedented services to immigrant victims in southern Delaware on issues ranging from housing to mental health services to domestic violence and other crimes. Neda has been recognized for outstanding commitment to the empowerment of women.

Imogene F. Chandler, has been a staunch supporter of early childhood education programs and has spent the past 56 years in the field. Her work in service to children and families in Northeast Wilmington has been a labor of love and commitment to preparing children for a bright and productive future. Through teaching, guidance and counseling, Ms. Chandler has touched the lives of several generations of families. She recognized as a resource in the community for helping parents locate supportive services for their children and serves as an inspiration to many in her community and her profession.

Susan Del Pesco, was the first woman elected as President of the Delaware Bar Association and the first women appointed to the Delaware Superior Court. She has worked diligently and persistently to improve the welfare of incarcerated women. She championed the opening of a Women’s Work Release and Treatment Center, the creation of a chapel at Baylor Women’s Correctional Institute (BWCI), and has led two book drives for residents at BWCI. Susan led an effort to identify and raise awareness of issues of gender-bias in the courts and continues to serve as a role model and inspiration to many female lawyers in Delaware.

Audrey Doberstein, served as President of Wilmington University for 26 years and was the first and only female president of a four year higher education institution in Delaware. Her leadership abilities and commitment to the vision of providing high quality higher educational opportunities to non-traditional students (unable to obtain admission to other institution) helped advance Wilmington College from its humble beginnings in a motel to a University with over 10,000 students and 9 locations. Dr. Doberstien encouraged many women to pursue higher education and then personally mentored them. She is recognized in academia and in the business community as a visionary and exemplary leader.

Moonyeen Klopfenstein, worked as a child birth educator for 44 years. Her compassion and commitment to educating pregnant women and their families in all aspects of the perinatal experience is evidenced by the number of programs and support groups she has initiated or expanded. One such group “Loving Arms Support Group” is one of the longest continuously running programs in the country for parents grieving the loss of a child. She has led a number of professional nursing organizations, task forces and committees related to maternal and child health and end-of-life issues. “Kloppy,” as most people know her, is the recipient of numerous honors and awards and is highly respected in her field.