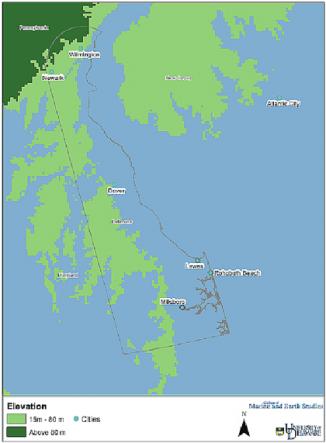 At the Delaware Audubon annual meeting on December 7th (A nice event, by the way), I had the chance to offer a few thoughts on Delaware, sea level rise, and climate change. Here is an expanded version of those comments.

First, the reality is that climate-changing emissions keep rising and, while humans could act to stop this, we aren’ doing so. See, for example “CO2 emissions rises mean dangerous climate change now almost certain.”

We can’t say that about Delaware (mean elevation 60 feet, much at sea level). Delaware is in fact the lowest-lying US state, with Florida and Louisiana being next at 100 feet. (data here).

Much of Delaware is going to disappear under the waves.

Delaware Audubon has done a nice job of pushing federal land managers to do a better job at the Prime Hook National Wildlife Refuge. From the Delaware Audubon website: “… the Delaware Audubon position called for working with inland farmers and land owners to acquire additional property for moving the refuge westward in the long term, including the possible creation of new freshwater impoundments that will strategically survive long enough to justify their creation, subject to long term sea level rise and subsidence projections.”

The gist of Audubon’s comments apply not only to Prime Hook but to the entire state of Delaware. However, we aren’t going to be able to move the whole state. Those Maryland counties to our West aren’t likely to cede their ground to Delaware, and even if they were, the waters are advancing on them also from the other direction-Chesapeake Bay.

Does this seem overly alarmist to you? Lets look into it a little:

We all know our land has been sinking and the waters rising. In Delaware, in the past century or so, these two things have been taken as amounting to a fraction of an inch per year of water rise, around a foot per century. Most of us know that climate change is speeding this up. This speedup has often been forecast to amount to a few inches over decades.

But the effects of climate change are persistently underestimated by “official” sources such as the Intergovernmental Panel on Climate Change (IPCC). This is not due so much to incompetence as to policies of including only very-well-demonstrated effects. But there are very many things happening outside the official forecasts, such as the melting of the Greenland ice cap. This alone could increase sea levels by 24 feet, and it’s melting faster and faster. Similar melting of Antarctic ice threatens even greater rise.

Another general type of problem is that we tend to project gradual developments over long periods of time. But in the climate change pot is bubbling much potential for sudden transitions, discontinuous events, tipping points, flipped switches.. For more on this see: Special Report: IPCC, assessing climate risk, consistently underestimates .

So, in my opinion, the devastating seal level rise that has officially been expected to be a matter of centuries, if acknowledged at all, may in fact prove to be a matter of decades. At least, the possibility needs more serious consideration. (Of course, it is possible that other effects may reduce sea level rise. Lets hope so. But so far the accumulating data don’t point that way.)

On December 6, 2012, the Climate Program Office of the National Oceanic and Atmospheric Administration (NOAA) released a report saying:

“… The Highest Scenario should be considered in situations where there is little tolerance for risk (e.g.new infrastructure with a long anticipated life cycle such as a power plant).”

Many people, reading this report, might conclude as I do that it’s likely to also be an underestimate.

Lets go back to some Delaware stats:

One source says Delaware has 1522 miles of shoreline.

Maybe we could dike the state and install lots of pumps, like New Orleans? Who would pay for it? Maybe rounding off a few corners could save a few bucks.

Data on mean elevation of counties seems a little hard to find, but One source gives this:

New Castle 100 ft (the Northwest part of NCC is above the “fall line” and geographically distinct.
Kent 36 ft
Sussex 52 ft

Mapping the details of “inundation,” considering the effects of storms, tides, topography, and possible protective measures, is complicated. Most maps are simplifications, and many of the simplifications tend to minimize the threat.

A DNREC map has a slider you can use to see effects of different levels of water rise, but it only goes up to five feet. It can be zoomed in to a good level of detail. Find your home on it! (These heights don’t include storm surges.)

NOAA has just released a similar map. It doesn’t zoom in quite as closely, but goes up to six feet.

What we need, of course, is a map showing the effects of much greater rise. Here is one from the University of Delaware:

Note that ultimately, if the major ice sheets melt, only the far Northwestern part of Delaware, above the fall line, is above water.

Part of the reluctance is that public officials don’t want to get too far “ahead of the curve” or make problems seem insoluble.

In April, 1996 I wrote an opinion piece, published in the Delaware State News, arguing “.low-lying coastal areas like ours are especially vulnerable to sea level rise caused by global warming. From this point of view DEC [Delaware Electric Cooperative] -and the rest of Delaware-ought to be providing some leadership ..”

Sixteen years later, how are we doing? I suppose the picture is mixed. In recent years Green Delaware has been at odds with DEC’s involvement in trying to build a new coal burner in Virginia-now most likely not happening. On the other hand, the Coop has increased it’s investment in energy conservation programs.

Several years ago Delaware had a good program to encourage rooftop solar installations, but funding for this program apparently hasn’t been maintained.

The Bloom Energy scheme, wherein a fossil fuel burner was subsidized by Delmarva Power ratepayers in the guise of “renewable energy,” is scandalous.

A disturbing proposal coming from the Markell administration-indeed, DNREC itself!-calls for unwise floodplain development at Fort Dupont, near Delaware City.

Closing note: The end of 2012 approaches, holidays are upcoming, many, many orgs beg for money at this time. We are wrestling with the question of what level of activity Green Delaware should maintain, whether there is support for us, what we should focus on. Please share your thoughts..