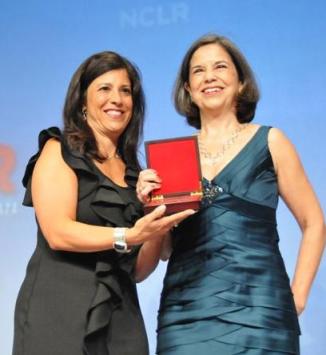 Washington, D.C. – NCLR (National Council of La Raza) presented six awards on July 26th to honor individuals and organizations that have demonstrated exemplaryaccomplishments, both in their fields and in service to the Hispanic community and the United States. NCLR President and CEO Janet Murguía congratulated the winners at the organization’s Awards Gala which was the closing event of the 2011 NCLR Annual Conference held July 23-26 in the District of Columbia.

The award winners are Mary’s Center, a nonprofit community organization in the District of Columbia; Maria Otero, Under Secretary of State for Democracy and Global Affairs; Jorge Muñoz, founder of the nonprofit organization An Angel in Queens; Ignacio E. Lozano, Jr., former publisher of La Opinión; former NFL player and coach Thomas R. “Tom” Flores; and former chair of the NCLR Board of Directors José H. Villarreal.

“NCLR is thrilled to recognize individuals who have made outstanding contributions to the Hispanic community and to our great nation. They have shown that there are no limits to what can be achieved through hard work, vision and perseverance,” Murguía said. “We congratulate Mary’s Center, Maria Otero, Jorge Muñoz, Ignacio Lozano, Jr., Tom Flores, and José Villarreal and thank them for being an inspiration to us all.”

Mary’s Center, the recipient of NCLR’s Affiliate of the Year Award, is a federally qualified health center in the District of Columbia that served more than 18,000 clients from over 40 countries in 2010. Mary’s Center provides immigrants with services such as prenatal care, home visits, family planning, and primary care for children and adolescents, as well as help with school and job placement. This award is the most visible recognition that NCLR bestows annually to showcase the achievements and impact of an outstanding Affiliate and to recognize the Affiliate’s active engagement in critical NCLR policy and programmatic initiatives.

Maria Otero, Under Secretary of State for Democracy and Global Affairs, was honored with the Graciela Olivarez La Raza Award. She is the highest-ranking Hispanic official at the State Department, and the first Latina Under Secretary in its history. She oversees and coordinates U.S. foreign relations on a variety of global issues, including democracy, human rights, and labor; environment, oceans, health, and science; population, refugees, and migration; and monitoring and combating trafficking in persons. NCLR annually presents this award to an individual or organization that has made significant contributions to promoting the interests of Hispanic Americans.

Jorge Muñoz received the Maclovio Barraza Award for Leadership. He has fed up to 140 day laborers in his Queens neighborhood seven days per week for the past seven years. His nonprofit, An Angel in Queens, operates on little more than what he can spare from his weekly paycheck as a school bus driver, a few donations from local restaurants, and the help of his family. Muñoz served an estimated of 180,000 free meals in the first five years alone. This award recognizes those who have worked for the betterment of the Hispanic community at the grassroots level and whose leadership has served as a source of strength and support to the Hispanic community.

Ignacio E. Lozano, Jr. was presented with the Ruben Salazar Award for Communications. As the former publisher of La Opinión,he is a highly respected leader within the media community for his commitment to quality journalism. His groundbreaking work made Spanish-language journalism an integral part of the national media landscape in the United States. This award is given to an individual who has dedicated his or her professional life to portraying issues, concerns, and/or news relevant to contemporary Hispanic America and promoting the positive contributions that Latinos have made to U.S. society.

The Roberto Clemente Award for Sports Excellence went to Thomas R. “Tom” Flores, the first Hispanic starting quarterback in NFL history and one of only three athletes to win the Super Bowl as both a player and a coach. He is counted among a select few athletes with four Super Bowl rings to his name. His contributions to professional football are impressive, and his contributions to the children of his native California through the Tom Flores Youth Foundation and other charitable work are equally inspiring. This award is presented to an individual renowned in the world of sports and committed to the advancement of Hispanic Americans.

The Raul Yzaguirre President’s Award was given to José H. Villarreal, chair of the NCLR Board of Directors from 2001 to 2004. This award is presented each year to an individual or organization that has shown outstanding support for NCLR’s mission, goals, and philosophy. Villarreal has dedicated his time, energy, and considerable talent to NCLR’s mission within and outside of the organization. He has personally contributed to the organization’s success by donating hundreds of hours of his time to NCLR and serving as an advisor and mentor to Murguía and an entire generation of emerging Latino leaders. Villarreal was a key player in securing the NCLR headquarters building just four blocks from the White House and establishing an endowment that provides income for NCLR in perpetuity.

The NCLR Awards Gala, which was co-sponsored by Amtrak, Eli Lilly and Company, Ford Motor Company, and UPS, was held at the Marriott Wardman Park Hotel.

NCLR-the largest national Hispanic civil rights and advocacy organization in the United States-works to improve opportunities for Latinos. For more information on NCLR, please visit www.nclr.org, or follow us on Facebook and Twitter.