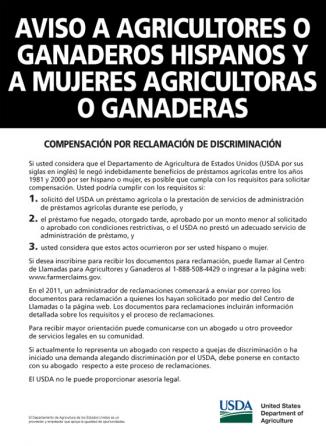 Washington, DC – As part of continued efforts to close the chapter on allegations that discrimination occurred at USDA in past decades, Agriculture Secretary Tom Vilsack and Assistant Attorney General Tony West announced the establishment of a process to resolve the claims of Hispanic and women farmers and ranchers who assert that they were discriminated against when seeking USDA farm loans.

“The Obama Administration has made it a priority to resolve all claims of past discrimination at USDA, and we are committed to closing this sad chapter in USDA’s history,” said Vilsack. “Hispanic and women farmers and ranchers who allege past discrimination can now come forward to participate in a claims process in which they have the opportunity to receive compensation.”

“Under the resolution announced, USDA and Hispanic and women farmers will be able to move forward and focus on the future,” said Tony West, Assistant Attorney General for the Civil Division of the Department of Justice. “The administrative process being established will give Hispanic and women farmers who believe they suffered discrimination the chance to have their claims heard.”

The claims process offers a streamlined alternative to litigation and provides at least $1.33 billion in compensation, plus up to $160 million in farm debt relief, to eligible Hispanic and women farmers and ranchers. This announcement follows the Obama Administration’s settlement of longstanding litigation brought by African American farmers and Native American farmers.

The program announced today provides up to $50,000 for each Hispanic or woman farmer who can show that USDA denied them a loan or loan servicing for discriminatory reasons for certain time periods between 1981 and 2000. Hispanic or female farmers who provide additional proof and meet other requirements can receive a $50,000 reward. Successful claimants are also eligible for funds to pay the taxes on their awards and for forgiveness of certain existing USDA loans. There are no filing fees or other costs to claimants to participate in the program. Participation is voluntary, and individuals who opt not to participate are not precluded by the program from filing a complaint in court.

In conjunction with this announcement, USDA is launching an outreach effort to potential claimants that will include a call center for farmers and ranchers, a website, public service announcements, and in-person meetings around the country. Individuals interested in participating in the claims process may register to receive a claims package, or may obtain more information, by visiting www.farmerclaims.gov. Beginning February 25, 2011, individuals can register to receive a claims package by calling the Farmer and Rancher Call Center at 1-888-508-4429. USDA cannot provide legal advice to potential claimants. Persons seeking legal advice may contact a lawyer or other legal services provider.

Under Secretary Vilsack’s leadership, USDA is addressing civil rights complaints that go back decades, and today’s announcement is another major step towards achieving that goal. USDA is committed to resolving allegations of past discrimination and ushering in “a new era of civil rights” for the Department. In February 2010, the Secretary announced the Pigford II settlement with African American farmers, and in October 2010, he announced the Keepseagle settlement with Native American farmers. Meanwhile, Secretary Vilsack continues to advocate for resolution of all remaining claims of past discrimination against USDA.

Audio and video public service announcements in English and Spanish from Secretary Vilsack and downloadable print and web banner ads on the Hispanic and women farmer claims process are available at: http://www.usda.gov/PSAs_Print_and_WebBanner_Ads.xml.