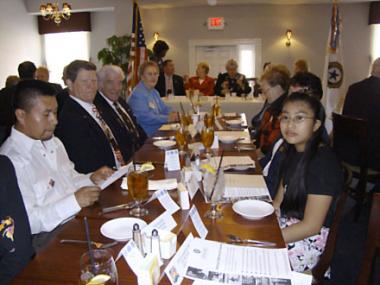 Founded in 1919, the American Legion Auxiliary is the world’s largest patriotic women’s service organization. With a membership of nearly 900,000, local ALA units have a strong presence in more than 9,500 communities nationwide. The Auxiliary’s mission to serve veterans, their families and their communities is carried out through its hundreds of outreach programs delivered by its members, volunteers and national headquarters.

Delegates to the 89th National Convention of the American Legion Auxiliary elected Rita Navarreté as national president during the close of the organization’s convention in Louisville, Ky. Navarreté is a lifetime member of Otero-Garcia-Navarreté Unit 72 in New Mexico. She is eligible for membership in the Auxiliary through her husband, Tony, a U.S. Army veteran of the Vietnam era.

Navarreté is a regular volunteer at the Raymond G. Murphy VA Medical Center in Albuquerque.

She has served in a variety of American Legion Auxiliary leadership roles at the local, state and national levels, including national chairman of the Veterans Affairs & Rehabilitation, Children & Youth, Community Service, and Membership committees.

Navarreté retired in 2003 as administrative officer under the Department of Agriculture, Rural Development Agency, completing 37 years as a federal public servant.

She and her husband Tony have been married for more than 40 years and have two sons, six grandsons and one granddaughter—all members of The American Legion Family.

She had only two full days in Georgetown. Tuesday morning (Nov 3) at Post 28 she helped with packing boxes for troops in Iraq (10:00 AM)

Navarreté was overwhelmed with the warm welcome she received. She helped with the packing of the Post 28 care packages that were being delivered overseas to our troops who are serving in Afghanistan.

Navarreté was also for luncheon at the Brick Hotel in Georgetown (Nov 4) at 11:30 AM.

She is the first Hispanic to reach this prestigious office within the American Legion Auxiliary. She interacted with the Hispanic community during her visit through visiting a day care, an after school program and a veterans group.

American Legion Auxiliary sponsored Miss Lorena Ramirez, a Long Neck 5th grader who won the Auxiliary Essay Contest, at the local, Department and National level. Lorena was 10 years old at the time she wrote the essay in honor of “Soldiers: Past, Present, and Future. Americans, Honor your Veterans”. She was awarded a plaque and over $600 dollars in cash for her essay writing.