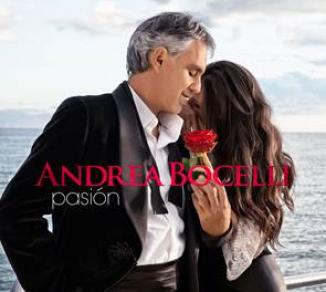 “Pasion” is in essence the second volume of “Amor,” with a “fil rouge” which ideally connects the albums. As with “Amor,” which featured timeless masterworks, “Pasion” includes several beloved classics such as “Love Me Tender,” “La Chica de Ipanema,” and “September Morn”. Jennifer Lopez is featured on the soft and sensual track “Quizás Quizás Quizás” and Nelly Furtado joins Bocelli on “Corcovado.” The album also features a duet with the late French chanteuse Edith Piaf on the song “La Vie En Rose.”

On the album, Bocelli sings in six languages (Italian, English, French, Spanish, Portuguese, and Neapolitan) with his unmistakable voice, as Foster accompanies him on piano, along with Peruvian guitarist Ramon Stagnaro. The sensual sound is rounded out by Cuban, Brazilian, and Portuguese rhythms and a 63-piece orchestra recorded in London.

“Andrea continues to be my favorite singer of all time,” Foster declares. “I pride myself on working with great voices, but he transcends that. He’s a singer for all people, from the common man to the Pope.”