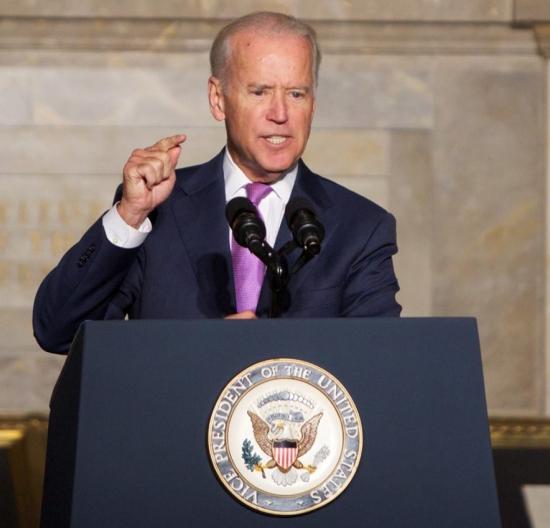 Yesterday (Sept.10), the National Archives was honored to host Vice President of the United States Joseph Biden as he commemorated the 20th anniversary of the passing of the Violence Against Women Act. The Vice President drafted the act as a Senator from Delaware.

Archivist of the United States David S. Ferriero opened the event with remarks on the vital role that the National Archives plays in maintaining the original records of the nation. The National Archives, as the nation’s recordkeeper, holds all of the Acts of Congress in our records including the 1994 Violence Against Women Act, pictured above. The original Act, on display at the event, was signed by then Speaker of the House, Thomas S. Foley, President Pro Tempore of the Senate, Robert C. Byrd, and President of the United States, William J. Clinton.

Held in the Rotunda, with the Charters of Freedom as a backdrop and an audience of around 250 invited guests, many of whom were instrumental in the creation and passage of the Act, the Vice President spoke of the work involved in the Act. He spoke of the battered women’s shelters, domestic violence victims, civil rights groups, and women’s groups who had worked and continued to work to educate the nation and eradicate domestic violence from our society. For more on his speech, go to the White House blog at http://go.usa.gov/V5K4.

According to the National Domestic Violence Hotline, created by the Violence Against Women Act, “More than 1 in 3 women (35.6%) and more than 1 in 4 men (28.5%) in the United States have experienced rape, physical violence and/or stalking by an intimate partner in their lifetime.” If you or someone you know is the victim of domestic violence, you can call the National Domestic Violence Hotline at 1-800-799-7233, 1-800-787-3224(TTY) or visit http://www.thehotline.org.