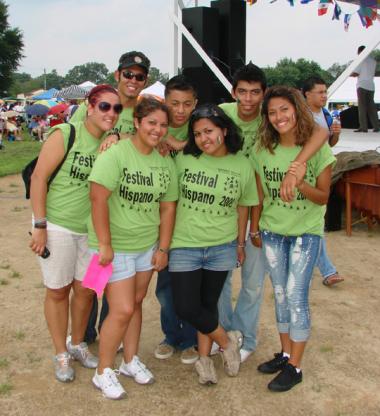 More than 5,000 people enjoyed the family day without rain, despite the threat and actual precipitation in nearby towns.

Many politicians, such as senator Tom Carper, just elected senator Joe Booth, Rob Robinson (Democratic candidate to the 37th District) and one of his sons, and Shaun Fink (41st District Republican Committee’s chairman) accompanied by his lovely family.

The consul of Mexico in Philadelphia didn’t want to miss the event.

All of them visited Hoy en Delaware’s stand and told us about the importance of the Festival.

Ruth Briggs, Republican candidate to the 37 th. District Representative couldn’t be there as consequence of an unfortunate accident.

One represent of El Centro Cultural thanked, the work of some people who collaborated in the beginning, and the people who are collaborating nowadays. She gave two Mass Media Excellence Awards to the radio station La Exitosa and the newspaper Hoy en Delaware for their support to the Festival along its fifteen years of life.

Festival Hispano is organized by El Centro Cultural, a non-profit group that has been promoting Hispanic arts & cultural activities in Sussex County.

Many people are not mentioned in this article by absence of space but not of importance. Their work was vital.