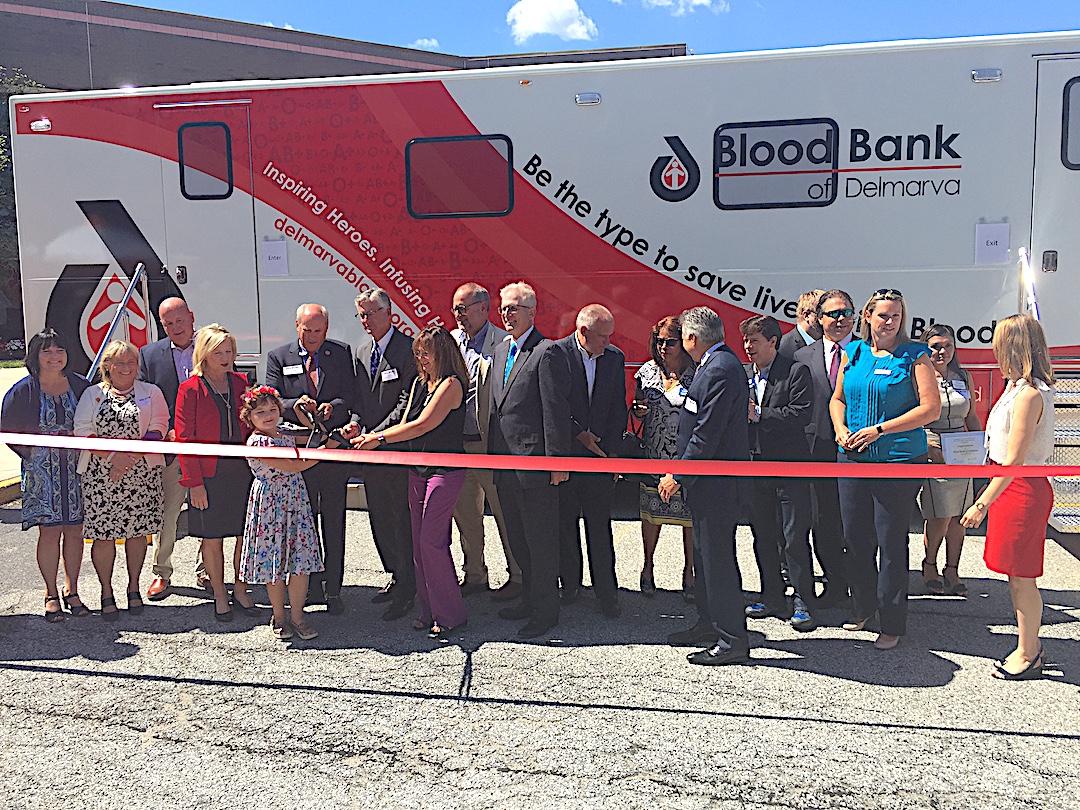 NEW CASTLE, Del.—Discover Bank, Blood Bank of Delmarva, Longwood Foundation and the Delaware Community Foundation on Thursday, Aug. 29 held the official ribbon cutting of the brand new bloodmobile procured through a pay for success contract entered into by the aforementioned parties.

This social impact fund, worth $450,000, is a groundbreaking pilot in the Diamond State, as the new bloodmobile bought through it, is the first ‘pay for success’ contract in Delaware. BBD asked Longwood for the grant two years ago and that stringent application process included Longwood working with Discover Bank, to provide the money in an innovative, social impact concept. At that point, Discover Bank turned the money over to the Delaware Community Foundation, in order to create the DCF Social Impact Fund in 2017 to pay for the bloodmobile’s construction.

“Discover Bank is honored to join forces with these esteemed organizations to provide Delaware with a program that will do so much good for the community,” said Jim Roszkowski, President for Discover Bank.

Dr. Christopher Hillyer, New York Blood Center Enterprises President and CEO and Blood Bank of Delmarva President, had the honor of introducing two special people at the ribbon cutting – blood recipients T.J. Mitchell, 19, and Riley Jadick, 7 – who illustrated the great need for a state of the art bloodmobile.

“T.J. Mitchell is a 19-year-old battling leukemia and has been multiply transfused with red blood cells and platelets,” Dr. Hillyer said. “Today, he is recovering from surgery and could not make it, but his mother, Lisa Haass, is here. Lisa, please know that we are thinking of T.J. and we are here for him.

“Let me also introduce Riley Jadick, a beautiful 7-year-old girl, who is battling leukemia and also has received many units of red blood cells and platelets. Riley is an inspiration to us all.”

Indeed, Jadick took center stage during the event as Lt. Governor Bethany Hall-Long asked Riley to stand by her side when she gave comments, pointing out how familiar she was with Jadick’s story.

“As a nurse and a mom, this is what today is all about when we go out to the mobile unit,” Lt. Gov. Hall-Long said. “It is about life sustaining programs that we put in place. I know as someone who has had family members who were saved by the Blood Bank after traumatic accidents and a mother and a brother who had cancer; I cannot say enough about the products of the Blood Bank. So, on behalf of Governor Carney, we are just do delighted to be here.”

A few speakers later, Jadick gave a speech she wrote herself from two, handwritten pages.

“Every day, kids just like me are diagnosed with cancer, and every day kids need blood, platelets and other blood products,” she said. “The new bloodmobile will help make sure that the Blood Bank can continue to get all the blood donations they need to help everyone who needs blood.”

When it was her turn to speak, Haass became emotional instantly as she spoke about her son, T.J., who was diagnosed with leukemia in April.

“He has had 11 pints of blood. He has had 15 bags of platelets. He is my hero,” she added, her voice cracking with tears in her eyes. “And he is working very hard to kick cancer’s [butt] … He is O positive [blood]. I am O positive. My sister is O positive. He calls donors his blood warriors because he’s going to need future blood. I want to thank everyone who donates because it is very, very important.”

After the event, Haass and her sister, Tammy Jopp, donated blood on the new bloodmobile parked outside Discover.

As referenced by Lt. Gov. Hall-Long, this partnership provided the model and inspiration for passage of Senate Bill 242, co-sponsored by Senator Jack Walsh and Rep. Kim Williams, establishing pay for success contracts in the state of Delaware. Governor John Carney sojourned to BBD to sign the bill into law in August 2018, describing it as an example of the “Delaware way” of doing business. Under the new law, organizations carry out projects that are beneficial to the general public, among other things, with funding from an intermediary. If the projects are successfully carried out, the state repays the intermediary.

With the new bloodmobile now a part of mobile operations, BBD will work hard to increase donors ages 17 to 34 by 500 annually, for three straight years. Upon successfully hitting those benchmarks, Longwood Foundation will rebate the money to Discover Bank. If BBD does not hit its marks, the rebate will be reduced accordingly, depending on how much the benchmarks are missed.

Other speakers and special guests included: