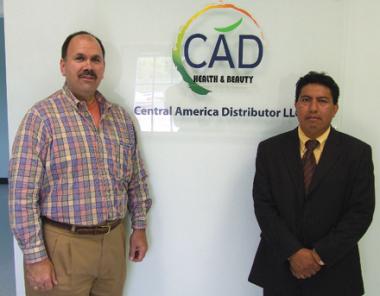 The beautiful spring day was the culmination of a long and winding road for Velasquez, who worked for several years in Sussex County’s poultry industry before starting his own health care distributorship in 2003. His new, and much larger, warehouse will allow him to now expand that business.

“This is a very special day for me and my family; I am very happy to open this new location,” says Velasquez, who is originally from the country of Guatemala. “This is my American dream. I came to this country, I worked hard and I’ve been able to build my own business.”

Velasquez heard all about the American dream growing up in Central America, and he was willing to work as hard as necessary to make his hopes and dreams a reality. He’s done just that; it hasn’t always been easy, but today Velasquez stands as a shining example in the Hispanic community, and all of Delaware, of what can be done with a solid vision and a lot of hard work.

“This country is beautiful and it affords a lot of opportunities for people who want to work hard,” said a beaming Velasquez, who is a United States citizen, moments after cutting the ribbon on his new facility. “If we focus on what we want to do, and we work very hard, we can reach our goals.”

More than 1,800 businesses in the mid-Atlantic region sell the vitamins and cosmetics Central American Distributor imports from Latin America. To meet the needs of a growing customer base, Velasquez needed more room that his former warehouse in the western Sussex County town of Blades afforded him.

He turned to the Whayland Co., a Laurel-based general contracting and construction management services company, to make his dream of a state-of-the-art warehouse a reality.

“This is obviously a proud day for Evelio, but it’s also a proud day for us at the Whayland Co.,” says Bob Wheatley, president of Whayland. “Evelio had a dream, he worked tirelessly to accomplish that dream and he allowed us to help him achieve it. We couldn’t be happier for Evelio, and for the city of Seaford, for this beautiful new facility.”

Seaford’s Ross Business Park was created several years ago as a way to draw more business to the western Sussex County city, which still boasts the largest year-round population in Sussex County.

It’s been an economic boon to Seaford in what can best be described as the “post-DuPont” era in western Sussex County.

“I think this will add a lot to the city of Seaford. They are good people and they run an extremely good business,” says Seaford Mayor Ed Butler. “I think this was a dream that Evelio realized, one that we often take for granted. Evelio feels like he’s blessed to be here and he’s excited to be here. And I’m excited to have him in Seaford.”

Since opening its doors in 1950, the management and staff of the Whayland Co., has worked continuously to secure its reputation as a high-value, reasonably priced provider of construction and project management services on the Delmarva Peninsula.

The firm will celebrate its 60th anniversary later this year. To learn more about the services offered by the Whayland Co., call 302-875-5445 or visit @link href=’http://www.whayland.com.