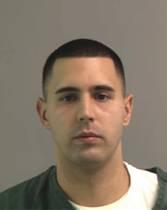 On October 8, Delaware Capitol Police arrested Sean D. Woodson, 32, of Milford as a fugitive from Maryland. Woodson was arrested at the Probation and Parole Office in Dover when it was discovered he was wanted by the Anne Arundel County Sheriff’s Office in connection with a burglary. After being processed and waiving extradition at Justice of the Peace Court 7, Woodson was committed to the Vaughn Correctional Center in Smyrna. Woodson will be held there until authorities from Maryland extradite back to Maryland.