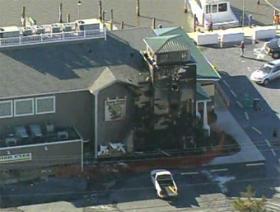 UPDATE: January 29, 2009 LEWES- Authorities on Thursday said carelessly discarded smoking materials are to blame for a New Year’s Eve fire that caused more than $1 million in damage to the Irish Eyes Restaurant and Pub on 213 Anglers Road in Lewes.

The Lewes Fire Department, assisted by several other Sussex County Fire Departments, responded to the scene of the two-story building and encountered heavy smoke coming from the building.

Employees smelled smoke and were able to evacuate all workers and patrons without injury.

According to the Delaware State Fire Marshal’s Office, investigators have determined that the fire originated on the northwest side in the area of the main entrance and was caused by carelessly discarded smoking materials. The fire spread quickly under the building due to high winds.

The New Year’s Eve fire was the second fire at the restaurant in less than two years time. Back in March 26, 2007 the restaurant burned down as the result of arson. The fire at the restaurant was one of two intentionally set in Lewes on that day. The suspect in both those fires, Lee Warrington of Lewes, pleaded no contest to arson charges and was sentenced to about five years in prison.

At one point the restaurant appeared to be fully involved in fire. Flames and smoke could be seen shooting out of the roof at one point. There is no word on the extent of the damages. So far there have been no reported injuries.

Patrons in the restaurant say the scene inside was chaotic.

“We had just finished lunch and smelled something burning and didn’t think too much of it and then all the waitresses started crying actually. They said we got to get everyone out. So we ran,” says Cassie Bryson a long time patron.