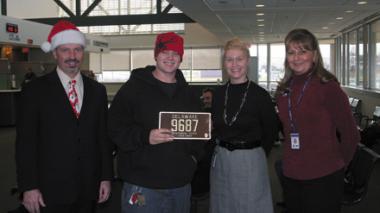 Dover – The Division of Motor Vehicles (DMV) is reminding Delawareans that their opportunity to purchase the limited edition Centennial License Plate is almost at an end. The popular, award-winning license plate can still be purchased for $100 with a credit card online at www.dmv.de.gov through midnight December 31, or in person at any DMV lane through 4:30 pm.

Since sales began October 1, 2008, nearly 8,000 of the black onyx and heritage gold colored plates have been sold. The plate design proved to be popular with license plate enthusiasts, and received the award for “Best Plate of the Year” from the Automobile License Plate Collectors Association (ALPCA) in May 2009.

The DMV conducted promotional drawings during the course of the sales period and awarded new low-digit license plates to winners of the contests. The final four-digit plate winner was Justin Rathmanner of Wilmington, who was picked at random from state-wide entries on December 16, at the Wilmington DMV lanes.

Centennial Plate numbering matches the plate number currently assigned to the registered vehicle, and may be displayed on all registered Delaware vehicles except motorcycles, mopeds, and IRP apportioned vehicles.