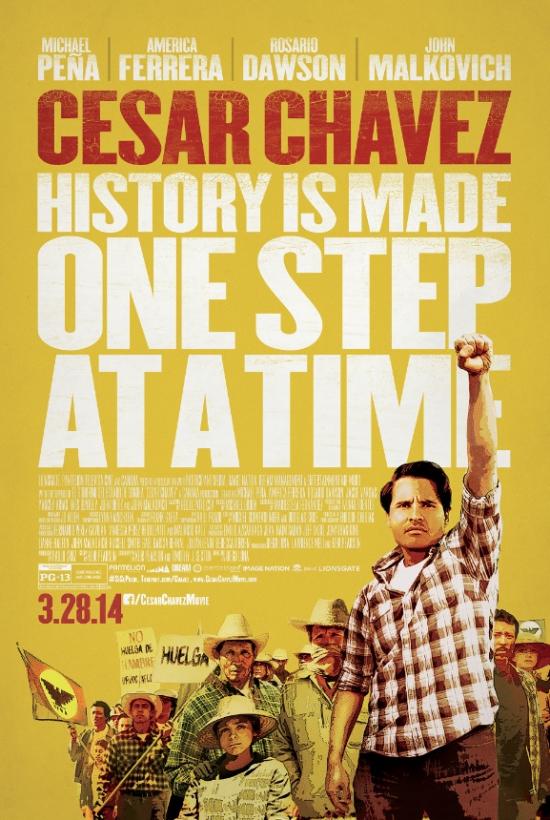 Labor leader César E. Chávez passed away in 1993 after a life’s work of fighting for farmworkers’ rights. Not only is César Chávez Day commemorated in several states and the César E. Chávez National Monument stands in his honor, now there comes a film about this legendary activist, Cesar Chavez, scheduled to hit movie screens on March 28.

Filmmakers focused on crucial periods of his life during the 1960’s that included the Delano march, the grape boycott, his first hunger strike and the coming to the bargaining table with landowners. Peña brings those moments to life with a sensitive portrayal of the labor leader that allows us to feel the personal sacrifices he made in his life. Peña shows us that Chávez had a quiet resolve and respect for all, even the bad-guy growers.

He also brings to life less-known incidences in the labor leader’s fight. One such episode takes place during the grape boycott when Chavez travels to Europe to gain support for his cause and to block grape shipments sanctioned by the U.S. government intended for the European market. The scene in which he empties crate after crate of grapes off a bridge is all about sweet victory.

Dolores Huerta, as portrayed by Dawson, is ever present. Her important role in the struggle may not be clearly defined in the movie, but it’s clear that she was by Chavez’s side every step of the way. Dawson captures her inner strength.

Ferrera’s portrayal of Chavez’s wife gives us more insights into Chavez’s character. Through her we see how he struggled to be a good husband and father and understand how his struggles were hers too.

Actual footage and news clips of the time are seamlessly woven into the movie. Even when paired with the scenery, costuming, props, and casting from the film production, you believe you are back in the 1960’s.

Yet, the biggest sigh of relief comes not from the moment that news breaks that growers are willing to meet with the UFW, but for a production that is respectful of the great labor leader. That said, this dramatic biopic of one great Latino leader reinforces the urgency for many more. We need to all get out and support this movie because with its success there will be more. And perhaps the next one will be about Dolores Huerta, who continues the good fight.

Katharine A. Díaz is a freelance writer and author of the award-winning cookbook Sabores Yucatecos: A Culinary Tour of the Yucatán (WPR Books: Comida, 2012).