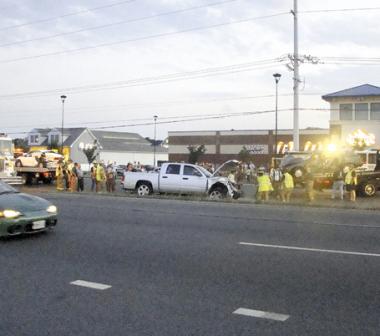 According to Cpl. Bruce Harris, a silver 2008 Dodge Dakota driven by Gordon Carney, 66, of Rehoboth Beach was traveling southbound on Route 1 north of Rehoboth Beach when the operator fell asleep at the wheel. The cruise control on the vehicle was engaged, and continued to move forward after Carney fell asleep.

The Dakota collided with a 1995 Chevrolet Corsica driven by Daphne Stubbolo, 19, of Dover. Stubbolo’s vehicle was forced into a 2005 Chevrolet Cavalier driven by Bonnie Gilday, 57, of Newark, which was then pushed into the rear of a 2009 Mercury Mariner driven by Erin Scoda, 31, of Lewes.

State Police closed the road for two hours while tending to the victims and removing debris from the scene. Carney, Stubbolo, Gilday, Scoda, and a child passenger in Scoda’s vehicle were transferred to Beebe Medical Center where each victim was treated and released.