The Republic of Chile’s O’Higgins Region VI just made an unprecedented step, sending its most concentrated diplomatic and trade delegation to visit the United States.

This historic tour of the Tri-State area was capped off with newly signed business agreements and an elegant, sold-out “Taste of Chile” Dinner celebration at Delaware’s prestigious Hotel DuPont.

The Chilean & American Chamber of Commerce orchestrated this international dinner to celebrate the strong commercial relationship between the O’Higgins Region Six and the Delaware Valley.

“This is big news for both of our country’s financial growth,” said Delaware’s Secretary for Economic Development, Alan Levin. Having been on trade missions to Chile himself, Levin observed, “Our Chilean partners understand what’s going on in the world, that you have to out-hustle and out-think the competition. Chile has more free-trade agreements than any nation in the world.

They understand what’s important, that free-trade is the way to go and hopefully Delaware can benefit from that. They know you don’t over-promise, instead, you over deliver.”

The majority of all produce shipped from Chile to the Ports of the Delaware River come from the agriculturally vibrant O’Higgins Six Region. In addition to Governor Concha, the Chilean delegation from O’Higgins comprised two senators, four congressmen, one mayor, two council members and three high ranking executives from the corporate sector.

“This is excellent for Delaware, our whole area and in the larger sense, it shows you just how dynamic the Chilean & American Chamber of Commerce is,” said CACC President Robert Palaima. “We really are ‘All the Connections – All the Time.’ From here in Delaware to Philadelphia and South Jersey and on to Chile, we continue to forge and nurture these very strong relationships.”

Chile’s Honorary Consul for the Tri State area, Benjamin Leavenworth helped squire the delegation between Delaware and Pennsylvania on their whirlwind three-day tour.

In addition to the fruit and wine trade between the two nations, Chile’s salmon industry was represented at the dinner in two ways – on the plate and by Verlasso’s Felipe Hevia who spoke of a new breakthrough in raising the delicious salmon served. “We are looking to save as many wild fish as possible. At Verlasso, our goal is major sustainability. Our fish are kept in the ocean, in open pens to the highest standards with no added hormones and now we can use less wild-caught ‘feeder fish.’ We reduced it by 75%, taking only one pound from the ocean to produce one pound from the farm, which is a huge breakthrough in our industry.”

The Chamber’s spheres of influence start at the Delaware River, head south to the Potomac and on to the Sea of Chiloé. Their highly developed pipeline and business channels extend to the highest ranking stateside officials and all the way to Chile’s president, ambassadors and industry leaders.

“The Chamber and the Consulate have every reason to feel proud of the results of the visit of the Chilean delegation. But this is just the beginning – when it comes to trade and investment between the two countries, the best is yet to come” said Ricardo Maldonado, Executive Director of the Chilean & American Chamber of Commerce.

Secretary Levin of Delaware had high praise for the extraordinary influence and impact the Chamber has on international trade. “Ricardo, Benjamin and Bob, the entire Chamber does an outstanding job. Most of the international chambers just do festive things, if you will. CACC is a working chamber, they know their role is to create opportunities for Chile and their partners and they do a great job at that and they do it every day.”

So while some people make dinner plans, the Chilean & American Chamber of Commerce makes history. 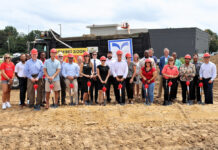