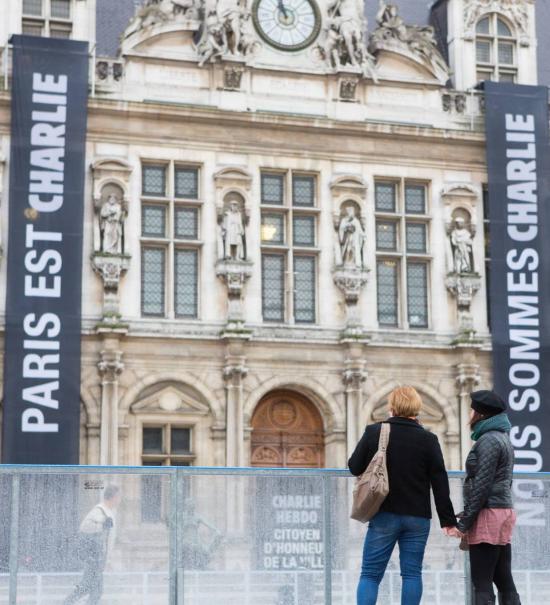 Following the attack against the magazine Charlie Hebdo, Parisians paid their respects to the victims and demonstrated their determination to defend their democracy, press and free speech.

Friday 9th January
9am: having called an extraordinary session of the Paris Council, Mayor Hidalgo proposes to Paris’ councilors to make Charlie Hebdo an Honorary Citizen of the City of Paris. Paying homage to the 12 victims of the attack who lost their lives as well as the injured and the police officer murdered in a separate attack the following day, Mayor Hidalgo spoke of “heroes who fell defending the most profound and crucial values of humanity”. She insisted, “Our liberty and our security are inseparable. Our duty is to stand strong and firm in defending our liberty and organizing our security. This solidarity and unity constitute the clearest response to those who despise our liberty and endeavour to destroy it.”

Following a minute’s silence, the Paris Council then votes unanimously in favour of bestowing the title of Honorary Citizen of the City of Paris to Charlie Hebdo. Awarded by the Paris Council to those distinguished by their commitment to promoting democracy and defending human rights and freedom of speech, the title has been awarded to Nelson Mandela and Aung San Suu Kyi. Charlie Hebdo is the first publication to become an Honorary Citizen of Paris. In addition, Mayor Hidalgo announced the organization of an exhibition featuring the cartoons of the murdered artists as well as the creation of a major international cartooning festival open to cartoonists from across the world to be held at Paris City Hall. Insisting that Charlie Hebdo must continue as a publication, Mayor Hidalgo indicated that Paris’ 163 councilors would also be receiving a subscription by way of support to the weekly magazine.

Thursday 8th January
12pm:Mayor Hidalgo joins President Hollande at Paris’ Police Prefecture for a ceremony in remembrance of the police officers killed in the line of duty. At the same time in front of Paris City Hall, Bertrand Delanoë, honorary Mayor of Paris, deputy mayors, Paris councilors and staff from the municipality gather for several minutes silence.

6pm: Mayor Hidalgo is joined by thousands of Parisians on place de la République to pay tribute to the victims.