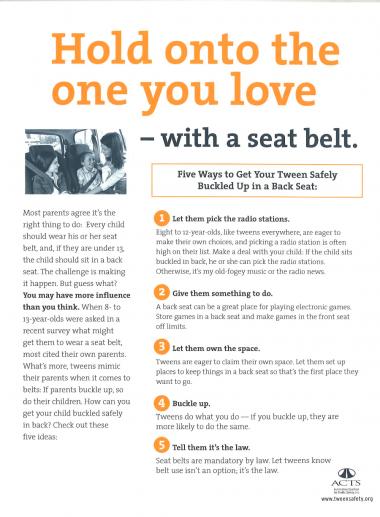 (Para leer la versión en español ir a Noticias Relacionadas).
Dover – Here is an important safety alert for parents and grandparents of 8 – 12 year old children in Delaware: If you allow your children to sit in the front seat of a vehicle, it’s not only against the law but they are also 40% more likely to be injured in a crash than if they had been sitting in the back seat! Observational surveys as well as national research also highlight a disturbing trend among 8 – 12 year old children, also referred to as ‘tweens’. That trend shows these young children are riding unsafely in the front seat, and nearly half of them who are killed as well as more than a quarter of them who are injured, are completely unrestrained regardless of seating position.

In response to these findings, the Delaware Office of Highway Safety (OHS) is launching the “Be a Backseat VIP” contest and getting tweens themselves actively involved in promoting traffic safety. This week, OHS is mailing informational kits to 14 Boys and Girls Clubs in the State of Delaware. A cover letter asks pre-teens at these clubs to put their creative skills and safety smarts to the test by submitting essays, songs, or videos which illustrate why it’s important to always ride buckled up and in the back seat. Tweens in the select Boys and Girls clubs will be able to submit entries by mail, or by going online and uploading their work starting October 19th.

The general public will have the opportunity to vote online for their favorite submission in two age categories (8 & 9, 10 – 12) beginning October 26th, by going to www.backseatvip.com. A Grand Prize winner and up to 5 runner up entrants in each age group will be selected, and the winners will be announced on Delmarva Broadcasting radio stations. All entrants must have their parents’ permission and understand that their submissions may be selected as a model for a future OHS awareness campaign aimed at increasing seat belt use for tweens.

Additionally, radio ads targeting parents with information about the importance of having their pre-teenage children buckled up and in the back seat began airing on local radio stations Monday October 12th. Parents are asked to take note of the following Traffic Safety Facts:

4)National fatality data shows that when adult drivers are unrestrained, 91% of tween passengers killed were unrestrained as well

6)When tweens think most of their friends wear seat belts, they are more likely to do the same, but when they think low use is normal their seat belt use drops too

Parents should also be aware that their voice matters when it comes to where tweens ride in the vehicle. When parents take control and re-enforce that tweens should sit in the back seat, they are more likely to do so compared to when tweens are allowed to pick their own seating position.

The Backseat VIP initiative is a follow up to the Be an All Star, Buckle Up effort that OHS in cooperation with the Bear Babe Ruth League and Nanticoke Little League earlier this year which encouraged seat belt use among tweens. Surveys conducted at the Little League fields showed seat belt use to be only in the low 70’s and 80’s for these young people and that anywhere from 34% – 51% of tweens were riding illegally in the front seat of the vehicle.

Delaware law requires all children under the age of 12 or 5’5 inches, whichever comes first, to ride in the back seat of a vehicle when air bags are present. Everyone from age 8 on up must be properly restrained by a seat belt under Delaware law.