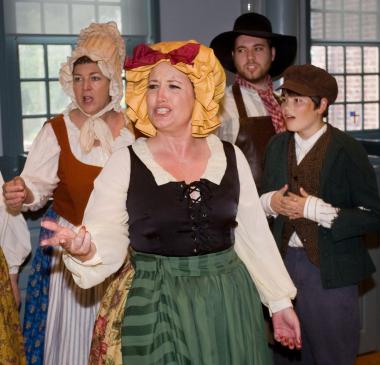 Last year, Clear Space sold out every performance of their production of SOUTH PACIFIC. This year, they present the classic family musical OLIVER! And it looks like the show will be another huge hit with audiences. OLIVER! tours to three different venues over a three-week span beginning July 16. For a complete list of performance dates and venue information.

Journey with the talented cast as they re-create London in 1850 and follow the world’s most famous orphan as his life takes him from workhouse to funeral parlor to joining a gang of pickpockets. This musical adaptation of Dickens’ famous novel is filled by jovial, lively and odd characters as well as familiar and catchy tunes, including “Consider Yourself,” “Food, Glorious Food” and “As Long as He Needs Me.”

“This is going to be such an amazing production!” said David Button, who plays the Artful Dodger. “The enthusiasm and urgency generated within even the first scene keeps you on the edge of your seat until the very end.” Button’s fellow orphans are all students in Clear Space’s “Broadway Bound” program, and he commented, “They are all so talented. It’s astounding what they bring to life on the stage as the orphans and pickpockets. The show is entertaining and empathetic at the same time and you really go on the journey with the characters.” The orphans/pickpockets include Zane Ellis of Selbyville, Stephen Mervine of Bridgeville, Triever Sherwood of Lewes, Paul Colucci and Gianna Abboud of Rehoboth Beach, Meghan Hayward of Milford, and Cole Haden of Bethany Beach as Oliver.

Ken Skrzesz, director of the show, added, “I am interested to see how the style of show takes shape over the final two weeks. The interaction between all of these completely different characters along Oliver’s journey to happiness truly demands your attention.”

Deb Rhoads, Costume Designer, is putting the finishing touches on the remarkable costumes she has created for the show. “I’ve been ‘dirtying’ things up for the past two days,” she said. With the style of the show, and the poverty of most of the characters surrounding Oliver, the original costumes she designed and constructed needed some extensive “handiwork” before they were ready. So, Deb has been adding mud, paint, and tearing holes within the costumes after their construction to add that extra feel. Corey Barto, a student of the Theatre Arts Academy at Cape Henlopen High School, portrays Bill Sykes in the show. After his final costume fitting, he commented, “I could not believe the difference in my costume after it had been torn up. However, it really makes me feel very different when I have it on. I can’t wait for dress rehearsal.”

All cast and crew are filled with excitement in these final two weeks before opening OLIVER! The tour begins Thursday, July 16, and Friday, July 17, at 7 p.m. at the Freeman Stage at Bayside, an outdoor venue in Fenwick Island and tickets are $10.From Thursday, July 23 through Sunday, July 26, the show plays at the new Epworth United Methodist Church on Holland Glade Road (just behind Tomato Sunshine on Route One) with evening shows at 7 p.m. and 3 p.m. matinee performances on Saturday, July 25 and Sunday, July 26. There will be a free ice cream social after the July 25 matinee where the audience will have an opportunity to meet the cast. OLIVER! then heads north to the Schwartz Center in Dover for performances on Saturday, August 1 at 7 p.m. and Sunday, August 2 at 3 p.m. For ticket purchase, venue or pricing information, please visit the website at @linkhref=’http://www.ClearSpaceProductions.org’target=”_blank”>www.www.ClearSpaceProductions.org/link or call the Clear Space Box Office at 302.644.3810