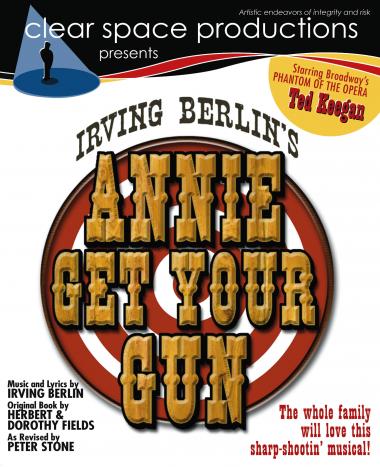 The Clear Space stage will be taken over by the Wild West this summer as they present Irving Berlin’s most popular musical Annie Get Your Gun, July 22 – August 1. Broadway veteran Ted Keegan – currently appearing in The Phantom of the Opera – will join local theatre favorite Erin Williams to portray famous sharpshooters Frank Butler and Annie Oakley.
The musical, with music and lyrics by Irving Berlin and book by Herbert and Dorothy Fields, is a fictionalized version of the life of gun-toting Phoebe Ann Mosey, who later took on the stage name Annie Oakley. Born August 13, 1860 into a very poor family in Darke County, Ohio, she was the fifth of seven children. Oakley began using her father’s rifle at an early age to hunt game, which she sold to local restaurants and hotels, saving enough money by the age of fifteen to pay off the mortgage on her family’s farm.
Oakley’s reputation as a great marksman gained her an invitation to a shooting match against famed sharpshooter Frank Butler, whom she defeated, much to the surprise of her opponent. The two hit it off immediately, beginning a relationship that resulted in marriage in 1876. The two traveled the country, touting their talents in various traveling shows, with Oakley acting as the assistant to Butler. Oakley could split a playing card edge-on from 90 feet away, and put five or six more holes in it before it hit the ground.
It wasn’t until 1885 when the couple joined Buffalo Bill Cody’s Wild Wild West Show that Oakley took star billing; Butler relinquished his position and took over as manager and assistant for his wife. The couple continued with the show until 1901, when a train accident caused major injury to Oakley’s back. After her recovery, the couple performed with various other shows until voluntary retirement in 1913, when they settled right here on the Eastern Shore in Cambridge, Maryland, one of three retirement properties owned by the stars.
The legend of folk hero Annie Oakley lives on today. In fact, this year is the 150th anniversary of her birth, and the 30th Annual Annie Oakley Days Festival, held in her hometown in Ohio during Clear Space’s production of Annie Get Your Gun. Musicals like Annie Get Your Gun serve to preserve the history of this American legend, however fictionalized the information may have become.
In addition, Clear Space is unveiling a brand-new online ticketing system just in time for Annie Get Your Gun. Business manager Jen Hayward uses the slogan “All New, All You” for the system. Patrons now have the ability to see what seats are still available for each performance and can select where they want to sit, then they can print their own tickets at home, avoiding any wait at the box office on the evening of the performance.
This new system does include a minimal fee of $2.00 per order, but affords patrons more conveniences when purchasing their tickets. “Patrons may still purchase tickets at the door and over the phone, but all ticket sales will include the $2.00 surchage. So, it really is to the advantage of the patron to select their tickets online,” says Hayward. “Being online gives the patron the most up-to-date information regarding availability to all Clear Space performances held at Cape Henlopen High School.”
Tickets for the July 22-25 and July 29-Aug. 1 performances of Annie Get Your Gun at CHHS are currently on sale, and are available online at www.ClearSpaceProductions.org or by phone at (302) 644-3810. Prices are $25 for adults, $20 for seniors, $15 for students and $5 for children 12 and under. “There’s No Business Like Show Business,” so be sure not to miss out on this fantastic musical! 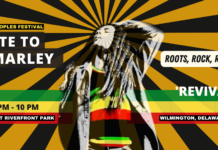