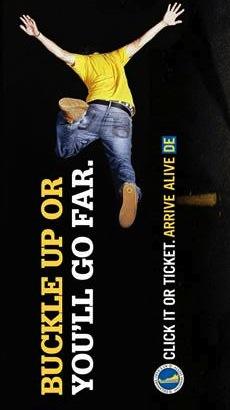 Dover, DE – The Click It or Ticket campaign will be in full effect with statewide overtime seat belt enforcement starting Monday, May 13th through 27th. Daily enforcement traffic safety checkpoints and saturation patrols will be conducted day & night by 31 state, local, and municipal police agencies and statewide. Much of the enforcement will occur in the afternoons and evenings when the majority of unrestrained injuries and fatal crashes occur.

“For every death or injury on our roadways we must look for ways to reduce these tragedies. Wearing a seat belt significantly decreases the risk of being seriously injured or killed in a crash. Remembering to buckle up for each and every trip is a simple way to prevent injuries and save lives,” said Secretary Lewis D. Schiliro, Delaware Department of Safety and Homeland Security.

Delaware law requires drivers and all passengers, including those in the back seat, to wear a seat belt. An officer can pull over a driver if he sees any person in the vehicle not wearing a seat belt, even if there is no other violation. Officers will be issuing citations for seat belt violations as part of a zero tolerance policy. The ticket, which goes to the driver no matter who is unbuckled in the vehicle, totals $83.50.

Delaware law enforcement will also be participating in a one day seat belt boarder to boarder enforcement blitz on May 20th at the Delaware & Pennsylvania line along I-95. Law enforcement agencies that share State borders will team up to provide increased seat belt enforcement at border sites, sending a ‘zero tolerance’ message to the public: Driving or riding unbuckled will result in a ticket, no matter what State. Other states participating include Pennsylvania, New York, New Jersey, Connecticut, Vermont, Maryland, and Massachusetts.

“As we kick-off the busy summer driving season it’s important that everyone buckles up every time they go out, both day and night – no excuses,” said Jana Simpler, Director for the Office of Highway Safety. “Delaware law enforcement officers are prepared to ticket anyone who is not wearing their seat belt – Click It or Ticket.”

Seat belt checks are being conducted at Newark, Caesar Rodney, Milford, Seaford and Indian River high schools by the student resource officers along with student groups. They are handing out Smarties candy and dum-dum lollipops along with good and bad ‘tickets’ to occupants in the car depending on who is buckled up or not.

Newark and Milford high schools are participating in the Buckle Up stencil project. The stencil serves as a visual reminder to Buckle Up before leaving the parking lot and is an image of two hands clicking a seat belt together with the works Buckle Up underneath.

Milford High School will also be holding a seat belt event on Wednesday May 29th for students that will include the roll over convincer, Racing Limo display, seat belt demo with high striker game, and OHS seat belt information table. Various prizes and items will be given to students participating in the seat belt activities. Dover International Speedway has also donate tickets to the upcoming NASCAR Nationwide Series race to be given out to students who are caught buckled up during the seat belt check.

OHS will once again team up with Tommy Baldwin Racing and NASCAR driver JJ Yeley to promote seat belt safety at Dover International Speedway. OHS will be the primary sponsor on the #36 TBR car and wrap it in Click It or Ticket messaging, and JJ Yeley will sign autographs at the OHS booth in the FanZone.

Seat belts save lives. Get the facts:

• Wearing a seat belt decreases your risk of being seriously injured or killed in a crash by approximately 50%.

• Strong seat belt laws protect families. When parents are buckled up, 90% of the time their children are too.