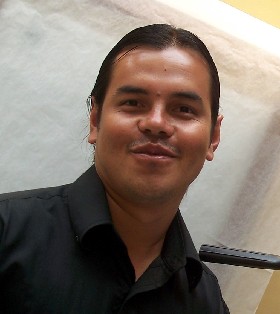 Georgetown is one of many stops on Freddy Caicedo’s mid-Atlantic tour during Hispanic Month in Delaware. Caicedo is an accomplished human rights expert from Colombia who will speak about the controversial US-Colombia Free Trade Agreement on October 22 at 7:00 p.m. at St. Paul’s Episcopal Church in Georgetown. An open discussion and a reception with refreshments will follow. Spanish-to-English translation will be provided.

The event is co-sponsored by the Delaware Chapter of the Episcopal Peace Fellowship based at St. Paul’s Episcopal Church and Witness for Peace, a politically independent grassroots organization dedicated to supporting peace, justice and sustainable economies in the Americas.

While trade agreements with foreign countries can open up lasting markets for American goods, Caicedo will explain how the Colombia trade deal, modeled after the hotly-contested North American Free Trade Agreement (NAFTA), could exploit workers in Colombia, eliminate jobs in the US, and threaten the livelihood of his community. “It’s not an agreement, but an imposition,” argues Caicedo, “an economic strategy that would enrich the elite but ruin rural communities and small business owners while trampling the rights of workers.”

Caicedo brings years of experience as a human rights investigator, educator, and organizer in Valle de Cauca, Colombia. He has exposed the extermination of Afro-Colombian and indigenous groups through the Association for Investigation and Social Action and has documented crimes against humanity with Colombia’s “Never Again” project. During his speaking engagement, Caicedo will further rely on his degree in Economics, experience as a human rights educator for public schools, and his training as an organizer with Christian-based communities. Representing a diverse array of Afro-Colombian groups, labor unions, and indigenous communities with whom he works, Caicedo will also tell their compelling stories of struggle against the free trade agreement and for peace in Colombia.

The Delaware chapter, which includes members from Maryland, meets the first Saturday of the month at 10:00 a.m. at St. Paul’s Episcopal Church at Academy and East Pine Streets in Georgetown, Delaware. For more information about the EPF chapter, call St. Paul’s Episcopal Church at (302) 856-2894 or find more information online at @link href=’http://www.stpaulsgeorgetown.org’target=”_blank”>www.stpaulsgeorgetown.org/link. For more information about the national organization based in Chicago, Illinois, call (312) 922-8628 or visit online @link href=’http://www.epfnational.org’target=”_blank”>www.epfnational.org/link.

About Witness for Peace: Founded in 1983, Witness for Peace is a politically independent grassroots organization based in Washington, D.C., with international offices in Colombia, Mexico and Nicaragua. WFP’s mission is to support peace, justice, and sustainable economies in the Americas by changing US policies and corporate practices which contribute to poverty and oppression in Latin America and the Caribbean.

For more information about WFP or Caicedo’s tour, contact Ben Beachy, Mid-Atlantic Organizer, at (202) 403-1752 or wfpma@witnessforpeace.org.