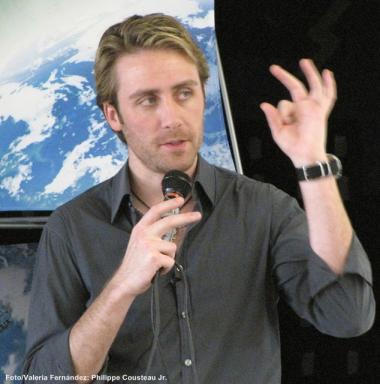 Scottsdale, Arizona. (ConCienciaNews) – “What is the deadliest animal in the ocean?” Sharks, killer whales, manta rays, reply a group of kids.

They are fifth and sixth graders listening carefully to an educational presentation at Yavapai Elementary School. The speaker is Philippe Cousteau, an environmentalist and the grandson of the ocean explorer Jacques Cousteau.

While his grandfather devoted his life to exploring the ocean, Philippe is taking this legacy to a new level: environmental protection.

It may not seem like a priority to discuss the conservation of the ocean in Arizona, located more than 220 miles (354 kilometers) from the sea. However, Cousteau states that it has never been more important.

“Water is very important in this state and it is a very limited resource,” he said in a short interview with ConCiencia. “Water brings us together. Although we do not live in the ocean, it affects us every day.”

His visit to schools are promoted by Discovery Education, a project related to the television channel of the same name, which broadcasts educational videos in all the classrooms in Arizona and around the rest of the nation.

“We are seeing a crisis around the world due to climate changes,” added Cousteau. “I think we all can and must do something about it. These kids deserve a better world than the one we are leaving them.”

During his educational presentation, Cousteau spoke about some of the dangers affecting the preservation of the ocean, ranging from the disappearance of coral reefs over the last 20 years in Florida to the presence of garbage heaps the size of Texas in the middle of the sea. “These challenges we are facing will have to be solved by you guys,” said Cousteau to an audience of nearly 300 kids.

He also focused on the different ways to make a difference by changing people’s habits: not using plastic bags when going shopping at the supermarket or using recyclable bottles. “You can also tell your parents about this,” he stated.

The talk with Cousteau was both educational and entertaining, since he feels that in order to make young people understand the importance of preserving marine species; they must also get to know them. “Do you know how many people die because of shark attacks every year? Between 50 and 60,” he said. “More people die in accidents involving a goldfish in a fishbowl. So next time you go to an aquarium, be careful,” he joked.

Cousteau, who is 29 years old, inherited his grandfather’s passion for oceans and protecting the environment. He has devoted himself to sharing this passion with kids. What he likes most is the experience of telling stories, which is what he has been doing through documentaries, including “The Ocean’s Deadliest” and, more recently, the television series “Blue August” on Discovery Channel. Cousteau is also a correspondent for Animal Planet.

“You cannot love, appreciate and protect something you have never seen,” he commented. Cousteau is a cofounder of EarthEcho International, a non-profit organization aimed at educating young people on environmental protection by means of community service. The organization was founded in honor of his father – also named Philippe – who died in an accident in 1979.

He has fond memories of his grandfather, the legendary Captain Cousteau, who devoted 60 years of his life to exploring the sea and sharing it with people through TV series and documentaries. Many people believe that space explorations reflect progress in the future. However, the sea is a part of the Earth of which only 5 to 10 percent has been explored, emphasized Cousteau.

“We still have a lot to explore here on Earth,” he said. “My grandfather was farsighted enough to realize that the world around him was changing and we need to take responsibility for making a difference.”

Before finishing his speech, Cousteau told students which animal was the most dangerous in the oceans. To young students’ surprise, it was not sharks or giant saltwater crocodiles. Actually, the deadliest animal is the human being.