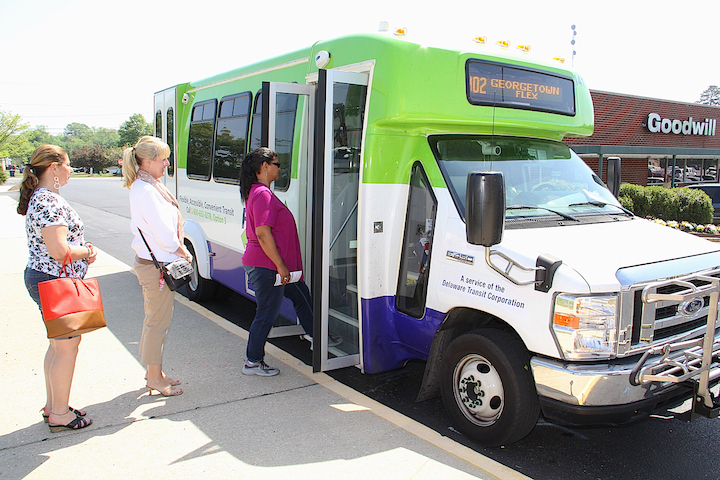 Previously scheduled for implementation in January, both the statewide bus service and fare changes approved by Delaware Transit Corporation (DTC) will be postponed to February 14, 2016.

The changes by county are as follows:

Route 1:  Routing will be extended to serve Amtrak Station on all trips.  Due to low ridership, four trips in each direction will no longer go into Bellefonte, instead continuing on Philadelphia Pike; however, Bellefonte will continue to be served by several other trips.

Route 6:  Route will continue to serve Amtrak Station.  The forty-eight trips operating just between Wilmington and Prices Corner Park & Ride only will be discontinued; twenty-four trips will be added between Newark and Wilmington.

Route 10:  Saturday service will be discontinued, instead adding trips to Route 28.

Route 12:  Routing will be changed to travel Market St. to the Riverfront via S. Market St. to Water St. to Justison St., serving stops on Market St.  Amtrak Station will be served by bus stop on S. Market St. at Rosa Parks Dr.  The twenty-six trips operating just between Riverfront and Rodney Square only will be discontinued.

Route 17:  The last four evening trips to Wilmington from DHSS Campus will no longer go into Holloway Terrace or Dunleith due to low ridership.

Route 22:  Trips into Wilmington will no longer serve the New Castle Airport onsite.

Route 28:  Will serve onsite at the new JPMorgan Chase (former AZ campus).  Seven roundtrips will be added on Saturdays.

Wilmington Trolley (Route 32):  Route will be discontinued due to low ridership.  Market St. will now be served by Route 12.

Route 33:  The eighteen trips operating just between Wilmington and Christiana Mall only will be discontinued; seven full trips will be added, four morning trips from Newark and three afternoon trips from Wilmington.  Trips will have time changes.

NEW Route 53:  New route will convert existing “Not In Service” buses to express service between DART Mid-County Wrangle Hill Park & Ride/Delaware City DMV on US 13 to the Newark Transit Hub via DE 72.

Route 113:  Service will be extended to serve Eden Hill Medical Center on all trips.

Route 117:  A bus stop will be added at the Kent County Library.

Flex 902:  Service will be added to Mountaire in Millsboro on five roundtrips to meet daytime shift times.

NEW Route 215: New route between Millsboro and Rehoboth will operate weekdays with four morning and six afternoon trips via DE 24.

New schedules will be available on www.DartFirstState.com beginning the week of January 12, 2015.

Sunday, January 17, 2016 is also the effective date of the statewide fare increase:

Off-route option by reservation is $1.00 (cash or DARTCard).