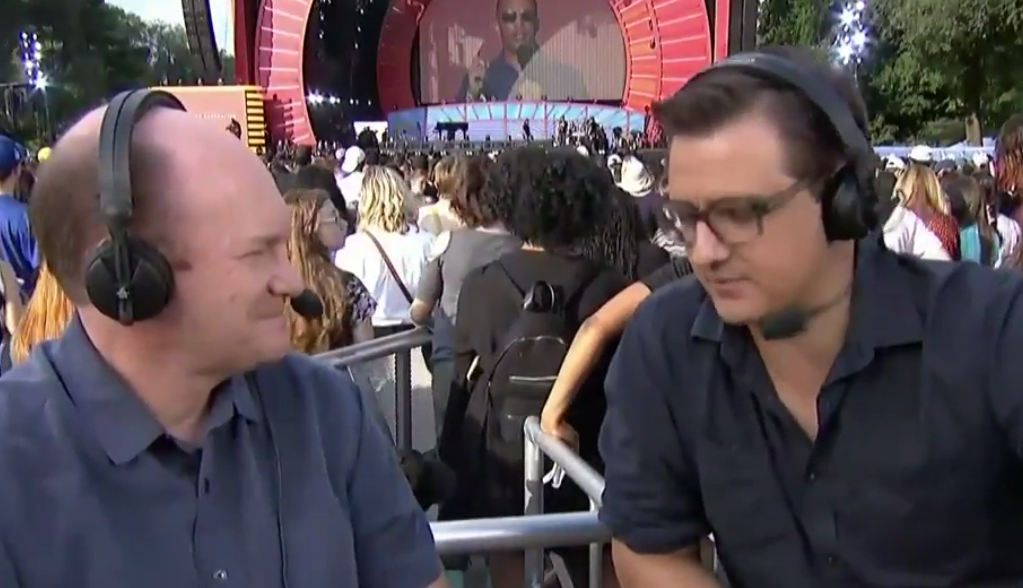 “Time is of the essence. They ought to be doing multiple investigations at the same time, there are multiple allegations currently in front of the committee.”

U.S. Senator Chris Coons (D-Del.) is a member of the Senate Judiciary Committee and joined MSNBC’s Chris Hayes at the 2018 Global Citizen Festival to discuss the status of the Kavanaugh nomination.

“I support it being one week. That’s what a compromise is all about. I would have liked longer. But one week I think was a key compromise and commitment here,” said Senator Coons.

“The core issue is, are they going to fully investigate the allegations in front of us? Will they just question two or three witnesses who we already know all about like Mark Judge, Judge Kavanaugh, Dr. Ford? Or will they question some of the dozen people who have come forward, publicly in the press, and said what Judge Kavanaugh said wasn’t true, I saw him doing this or doing that, drinking with me at Yale or at a certain type of party in high school? Will that be investigated? That’s the issue.”

For Sen. Coons this is what happened:

“Well, first Jeff Flake is the real hero here of what happened. He just needed some reassurance to listen to his own conscience and to recognize that the very real doubts he had at the end of Dr. Ford’s testimony and which a number of other colleagues had were worth taking a pause and investigating. Jeff’s first comment to me when we went back stage to talk is this is tearing our country apart. He had been deeply moved, I had been deeply moved by the number of folks that had spoken to us, talked to us, texted to us, e-mailed us. During Dr. Ford’s testimony, I heard from people who I had known my whole life and also people I had never met with their stories of sexual assault. And I deeply respect Jeff for standing up to a ton of pressure to demand a one week pause and an expanded FBI background check. Now the challenge is going to be making that real.”

Coons considers about the FBI investigation that “the FBI works at the direction of the White House in investigating the background of an administration nominee like Judge Kavanaugh. So, it is the White House Counsel or the President who says, this is the scope of the further investigation. Because they are doing it at the request of the Senate Judiciary Committee and what Senator Flake said was limited in scope and duration, I expect, I support it being one week. That’s what a compromise is all about. I would have liked longer. But one week I think was a key compromise and commitment here (…) I’d be concerned that that was an attempt to really sharply narrow. Look, if it’s a list of 75 witnesses, I’d say okay, in a week that is a lot, but if it’s list of three, that is an attempt to shut it down and not make this a legitimate background check”.

Coons thinks that “it is appropriate for us to offer some input on what we think should or shouldn’t be in the scope of this investigation and they will take it as they do take advice or input from senators with typical investigations on Judiciary Committee. Time is of the essence. They ought to be doing multiple investigations at the same time, there are multiple allegations currently in front of the committee. And I think it is not hard to figure out the universe of witnesses. It is not 500. It may not be 50. But it has to be more than five.”

US Senator commented about the witnesses: “It is more than five. And I hope all of them will offer to be interviewed, will come forward and will cooperate. There was some concern last night, but I think it was Deborah Ramirez, her attorney was saying a week is not long enough, this isn’t legitimate, she wouldn’t cooperate. I think that was misunderstood by some of my colleagues. We spoke back and forth on it and my understanding this morning is that she is offering to be questioned and may well be being questioned by the FBI today”.

Sen. Coons is almost the same age as Senator Flake, they’re both 55, only a few months apart, Coons said that in their 20s, he spent a semester in Kenya as a college student and Flake spent time in Zimbabwe as a Mormon missionary. They both lived and worked in South Africa, he lived and worked in Namibia. This was in the late ’80s when the anti-apartheid movement was an absolutely critical part of the politics of the continent and the world.

Coons was the chair of the Africa Subcommittee his first four years and Flake succeeded him, he is the chair now. “We’ve traveled together to Africa. We’ve legislated together on Africa. And it is great to be at Global Citizen together”, said Coons.

Delaware Hispanic Commission to be under new leadership