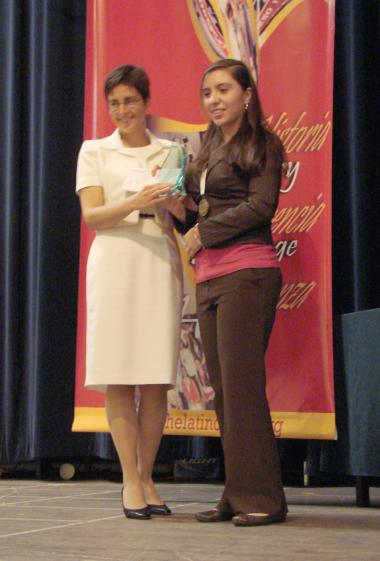 Wilmington- These are the two Outstanding Students of the Year for Middle School that received their recognition at an award ceremony held in Dover on April 25, 2009:

He is currently a 7th grader at Sanford School and has earned a cumulative GPA of 4.0, and scored in top 98% of the state on the standardized ERB test.

Not only does this student excel academically, but athletically as well, playing on his school’s soccer and basketball teams.

Last year, he played soccer with a traveling team in Delaware that won first place in a soccer tournament.

Aside from his athletic abilities, he also enjoys playing the guitar. He loves music and has been taking guitar lessons for the past 2 years, though taught himself to play songs from his favorite Spanish-language artist, Juanes.

This year’s winner also enjoys participating in several volunteer opportunities with his school and has volunteered at several nursing homes and homeless shelters.

He has proven to be a very outgoing young man who loves to study, play sports and serve the community.

She is currently an 8th grader at the Gauger-Cobbs Middle School. She has earned a GPA of 4.0 and recently received the Ferguson Award based on her DTSP test scores.

In addition, she serves as president of the Business Professionals of America Club at her school and has been granted membership in the Junior National Honor Society.

She is also a dynamic member of the Peer Mediation/Peer Leadership program, and in her free time enjoys swimming and tutoring.
Her goal is to attend college and pursue a career in medicine, business or law.

Her instructors are confident that with such skill and determination, she will continue to excel in whatever she does.

Information provided by the Latin American Community Center (LACC) in Wilmington and GACHA.