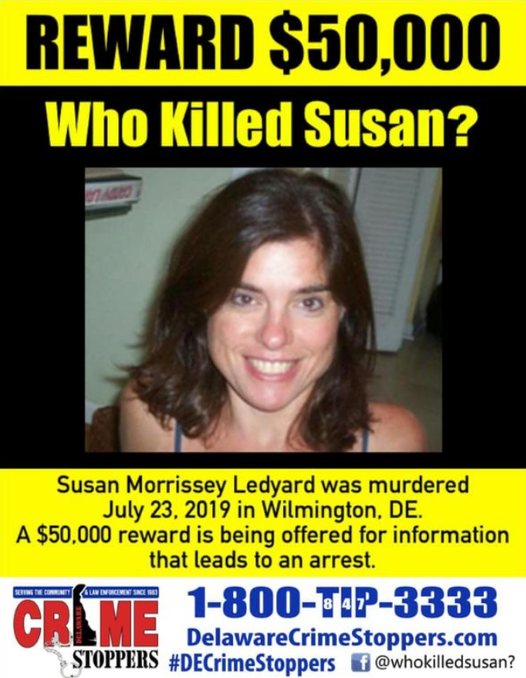 On July 23, 2019,  at 7:39 am, the body of a white female was recovered from the Brandywine River in the area of Northeast Boulevard in the City of Wilmington. The victim had visible injuries to her body. The victim was turned over to the Division of Forensic Science for a post mortem examination. The cause of death was determined to be Blunt Force Trauma and Drowning. The manner of death was ruled a Homicide. Susan was 5′ 04″, 130 pounds, with shoulder-length brown hair. She was wearing a purple tank top at the time of her death.

On the same date at 8:54 am, Susan’s black 2016 Honda Civic was located parked adjacent to the Rising Sun Lane Bridge over the Brandywine River, approximately three miles upriver from the location where Susan was recovered. Based on the timeline and the course of the river, it is not believed Susan entered the Brandywine where the vehicle was parked.

Using video surveillance footage located in the area and her cell phone records, detectives could create a partial timeline of her activities.

Susan was active on her cell phone throughout the night, texting and calling friends until 2:45 am. At 3:02 am, Susan’s car pulls out of her driveway, and approximately two minutes later, it is parked on Walkers Mill Road. Based on the time elapsed, detectives believe the Honda drove directly from the house to the location where it was found.

Through the examination of data from a Fitbit worn by Susan, detectives could confirm Susan was alive until approximately 7:00 am. However, her whereabouts between 3:00 and 7:00 am are unknown. Detectives also do not know what caused her to leave her residence.

The Homicide Unit has received assistance in this investigation from outside law enforcement agencies and civilian experts. Detectives continue to seek information from the public regarding Susan’s murder and her activities in the hours before her death.

The Morrissey family, Susan’s parents, and siblings have greatly assisted in this investigation. Partnering with Crimestoppers, the Morrissey family is offering a $50,000 reward for information leading to an arrest.

Anyone with information regarding this case should contact Detective Daniel Grassi of the Homicide Unit at  302 365-8441 or daniel.grassi@delaware.gov.  Information may also be provided by calling Delaware CrimeStoppers at 1-800-TIP-333 or via the internet at www.delawarecrimestoppersweb.com