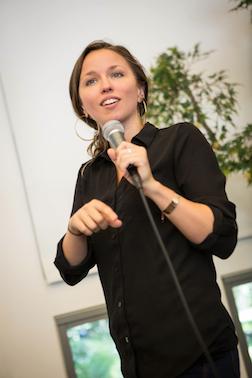 The Happiness Project for Music and Mental Health will be held on Wednesday, March 4 from noon-10 p.m. at Delaware Technical Community College’s Owens Campus in Georgetown. The event is free to students, staff, faculty, and the general public, and is open to all ages.

The event is sponsored by the Owens Campus Aevidum student club, which promotes mental health awareness on campus. It will feature 14 local and regional performers as well as multiple local mental health organizations and vendors who will have information available about the services they provide. In addition, the club will be promoting Spread the Word to End the Word, an initiative from Special Olympics to remove the “r-word” from people’s vocabulary, and there will also be literature and information on the national non-profit organization To Write Love on Her Arms.

“The students have really wanted a music event for the last several years,” said Jason Burlew, Owens Campus public relations manager and Aevidum club advisor. “My club thought a great way to bring awareness to all of the mental health organizations was to draw people in with as many great performers as we could find.”

The headline performer is Candy Hearts, a pop-punk band from New Jersey that recently released their second full length album, “All the Ways You Let Me Down,” in summer 2014. In the fall, Candy Hearts toured with New Found Glory both in the United States and the United Kingdom. This summer they will play all of the dates on the Vans Warped Tour.

National spoken word performer Sierra DeMulder is also performing at the event. DeMulder is one of the founders of Button Poetry, the largest distributor of spoken word in the world, and is a two-time National Poetry Slam champion, an author, and an educator.

“We are really excited about the level of talent we were able to get to play this event,” said Candace Fortney, Aevidum vice president. “We listened to a lot of local and regional acts and came up with a lineup that includes pop, punk, acoustic, rock, hip-hop, folk, and more. There should be something for everyone to enjoy.”

Some of the organizations that will be on hand include: Brandywine Counseling, Kent Sussex Counseling, La Esperanza, Delaware Gambling Council, the Sarah Smile Foundation, and the Jesse Klump Suicide Awareness and Prevention Program. There will also be several local vendors and businesses.

“Beyond all of the fun we are going to have, I really see this as a day of discovery,” Burlew said. “I want people to discover new music, I want them to connect with these local organizations that do so much for such an important cause, and then I want people who aren’t familiar with Delaware Tech to be able to see what an amazing facility we have here.”

PHOTOS:
Candy Hearts, a pop-punk band from New Jersey, will be headlining The Happiness Project for Music and Mental Health, a music festival and mental health awareness fair at Delaware Tech’s Owens Campus in Georgetown on March 4 from noon-10 p.m.

Nalani & Sarina are twin sisters from New Jersey who perform acoustic soul. They have previously performed in Delaware as part of The Ladybug Festival in Wilmington in 2014.

Danielle & Jennifer are acoustic singer/songwriters who performed twice in Delaware in 2014, at The Ladybug Festival in Wilmington and at the Dewey Beach Music Conference.