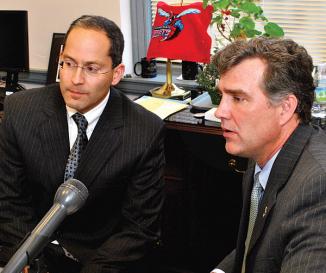 On a 18-2 vote, lawmakers OK’d the measure, which now heads to Gov. Jack Markell for action defeating an effort to limit the measure only to New Castle County in the process.

“I’m thrilled that this got through the Senate,” said Sen. Michael Katz, D-Centerville, who shepherded the measure through the Senate. “I appreciate Rep. Byron Short’s leadership on this bill, starting it in the House and pushing it hard in the best interest of the community. I’m thrilled that it’s not only going to apply to New Castle County but that Kent and Sussex County citizens will have this extra bit of protection.”
Under the measure, door-to-door vendors would be required to show a visible ID that states who they are, who they work for and their employer’s address and telephone number. The bill also limits door-to-door sales hours to 9 a.m. to 8 p.m. It does not include utility crews making house calls or home sales events, such as Tupperware parties.

People and businesses found in violation of the new law could face maximum fines of $150 for a first offense and maximum fines of $250 for subsequent offenses. Short, D-Highland Woods, said he hopes that will discourage companies that sweep through the state on sales drives from annoying Delawareans in the future.

“The issue of door-to-door sales is brought up at almost every civic association meeting I go to,” he said. “The most important thing is that this bill has teeth in it. There is action Delawareans can take and penalties if solicitors are in their neighborhood and not in compliance with this new law. The next step in addressing this issue is reaching out to my constituents to make sure they are aware of the protections this bill provides.”

But, Short added, that he and Katz tried to balance business and public concerns.

“We’re both business guys,” Short said. “It was very important to us that we not do anything that would make life hard for business, so we tried to make every effort to make sure this was a smooth process. My hope is really that the groups that just come through will learn that Delaware’s not the place for them and that they’ll avoid our neighborhoods.”

Katz said that, with increasing rates of crimes such as burglaries and home invasions, the bill has taken on an urgency it didn’t have when he and Short first started working on it.

“This address not only a public safety issue, it also addresses a privacy issue that’s important to our communities,” Katz said. “I don’t think the safety issue can be stressed enough and that concern has probably increased since we first introduced the bill. People want to know the person knocking on their door is a legitimate business person, not someone trying to set them up for a robbery or home invasion.”

Katz said he’s gotten numerous calls from citizens who are worried about just those threats.

“With this, you’ll be able to look at a person and see identification,” he said. “And I think that will give people greater peace of mind that someone’s legitimate.”