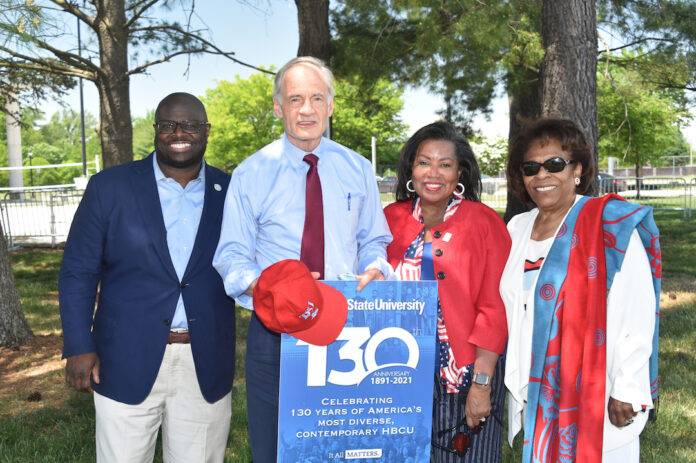 DOVER, Del. – Delaware State University kicked off its celebration of the institution’s 130th Anniversary with an May 15 event held on campus an attended by University official and many alumni. The celebration was held on the outdoor basketball courts near the MLK Jr. Student Center

University President Tony Allen asked the gathering to be mindful of three number – 3, 3, and 7 (the institution began 130 years ago with three buildings, three instructors and seven students) – as well as the well-known New Testament scripture “Faith is the substance of things hoped for, the evidence of things not see.”

Dr. Allen noted the impact and contributions of past Del State presidents Dr. Jerome Holland, Dr. Luna Mishoe, Dr. William B. DeLauder and Dr. Harry L. Williams in the development of Del State into the institution of excellence it is today.

“What began with three instructors, three buildings and seven students, that college is now $140 million (University) organization, with a $28 million research portfolio, a $40 million endowment, and more than 25,000 alumni;

U.S. Sen. Tom Carper, who as the Delaware governor in 1993 signed into law the name change that established Del State’s University status, noted that he started his career in politics, working in an economic development office set up in the ETV Building.

University Trustee Lois Hobbs noted the University’s Early College High School – the only such school on a college campus in Delaware – is adding greatly to Del State legacy.

“I believe with the Early College High School we are raising Hornets who leave the high school nest – or hive – with college credits and a can-do attitude,” Trustee Hobbs said. “They rise to DSU where they learn to build their own nest with education, values and optimism.”

Samaj Hazzard, rising senior from Philadelphia and the president of the 2021-2022 Student Government Association, noted Del State’s “legacy of greatness” throughout its history.

The celebration also featured the music of nationally known recording artist Avery Sunshine, as well as from the soulful sounds of Urban Guerilla Orchestra from Philadelphia.

The Delaware General Assembly established the Delaware College for Colored Students in 1891 through the federal Morrill Act of 1890. Classes began on Feb. 2, 1892.