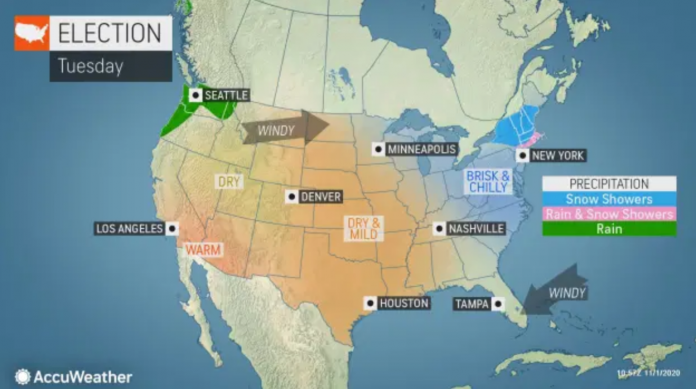 November 3, 2020 –  More than 93 million people have already voted — more than half of the total votes cast in 2016 — with two days to go until Election Day on Nov. 3, 2020, according to the U.S. Elections Project. People have been braving the elements and carrying umbrellas in long lines at the polls for weeks as early in-person voting opened up across several states and in the nation’s capital.

Early voting began amid a tumultuous autumn weather pattern, filled with rain, snow and ice storms — and not to mention during an extremely busy hurricane season that has still been packing punches on U.S. soil. The millions of Americans who mailed in ballots or returned them to designated drop-off locations avoided the nation’s worst weather, and it seems that those who are waiting for Election Day may be in luck weather-wise, too.

“In light of weather troubles from earlier this autumn, overall benign conditions are in store with no major storms forecast across the nation for the presidential election on Tuesday,” AccuWeather Senior Meteorologist Brett Anderson said.

Besides winterlike winds and snow showers that will chill the Northeast, voters who have not yet cast a ballot will face few weather problems on Election Day.

However, portions of the Southeast will still be in cleanup mode in the wake of widespread damage from Zeta, which made landfall as a Category 2 hurricane in Louisiana Wednesday afternoon and then raced across the Southeast states. Power was out for 2 million residents from the Gulf Coast through the Southeast on Thursday after the storm’s rampage. Louisiana’s Secretary of State’s Office is working with power companies to assess the damage at polling sites and to help restore electricity, according to KATC TV, and officials said emergency polling locations will be opened up as needed in time for the presidential election.

Meanwhile, cleanup and power restoration operations may also still be ongoing in portions of the southern Plains in the aftermath of a devastating ice storm that struck this past week. Farther west, people will still be picking up the pieces in parts of the western U.S., following massive wildfires, some of which may still be ongoing.

Temperatures on Election Day may be 50, 60 and even 70 degrees Fahrenheit higher compared to record low levels measured during the throes of a deep freeze last weekend and early this part week in the Rockies and Plains.