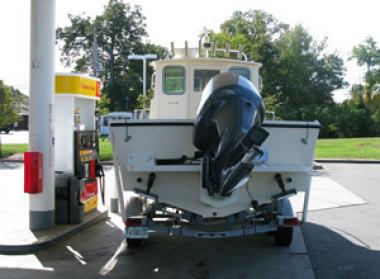 ALEXANDRIA, VA, December 3, 2009 – More ethanol in the nation’s gasoline supply? Not just yet, said the Environmental Protection Agency on Monday when it announced it will delay making a decision on a waiver requested by the pro-ethanol lobbying group Growth Energy to increase the amount of ethanol in gas beyond the current 10% level. However, the country’s largest recreational boating organization says it remains concerned that the EPA said that it will review initial findings on testing of mid-level ethanol blends in newer automobiles before revisiting the waiver possibility in mid-2010.

Boat Owners Association of The United States (BoatU.S.) says that the harm already inflicted on boat owners when ethanol in gasoline was increased to 10% (E10) several years ago should be a concern for regulators as they debate the effect of higher ethanol blends in all gas-powered vehicles and equipment – not just automobiles.

“Waiting for the data is a step in the right direction,” said BoatU.S. Vice President of Government Affairs Margaret Podlich. “However, focusing on automobiles leaves out millions of other gas-powered engines. If you own a lawn mower, chain saw, all-terrain vehicle, generator, or boat, I would be very concerned over the costs to repair or replace those items after using higher levels of ethanol gas. Additionally, the possibility of selling gas with different amounts of ethanol content at the pump raises significant infrastructure and consumer education concerns,” she added.

Ethanol came into widespread use as a “oxygenate” or combustion enhancer after a previous additive, MTBE, was identified as a carcinogen. However, many boaters were caught off guard as the level of ethanol, also an effective solvent, was increased in the nationwide fuel supply to 10%, or E10, with little notice. This introduction of E10 damaged boat fuel system components such as gas tanks, fuel lines and seals, and caused some catastrophic engine failures while boaters were forced to pick up the tab for expensive repairs.

When ethanol fuel is stored for several months, it can attract moisture and “phase separate” into different solutions of low octane gas and water that will not burn properly, if at all. “Storage is not an issue with cars as most Americans regularly fill their tanks. However, would your emergency generator start when you need it?” asks Podlich.

The U.S. Coast Guard Office of Boating Safety has also raised concerns about higher levels of ethanol and the lack of independent testing. The accelerated deterioration and failure of fuel system components, ethanol’s affect on clean air devices, and level of risk for fire and explosion in the recreational boat fleet are cited.

“We strongly encourage the EPA to use the next six months to consider the effects of higher ethanol blends on all gas powered engines, and not on just new products. Americans deserve to know if all of their gas-powered engines will run reliably and safely on this proposed new fuel,” said Podlich.

“Having an additional type of higher ethanol fuel available would require new gas pumps and possibly storage tanks, and would cause significant customer confusion and misfueling. There is no federal requirement to label gas pumps — consumers in some states don’t know what they are buying now, so how are they expected to make the right choice if there are even more options available in the future?” questions Podlich.

BoatU.S. supports a common-sense approach to the use of alternative fuels as a way for the nation to diversify its sources of energy. The Association is part of a coalition of 46 motor sports, environmental, food and citizen advocate groups under the banner followthescience.org. BoatU.S. is also member of AllSAFE, the Alliance for a Safe Alternative Fuels Environment.

The association urges anyone concerned about a higher percentage of ethanol in gasoline and the lack of testing to contact their members of Congress.