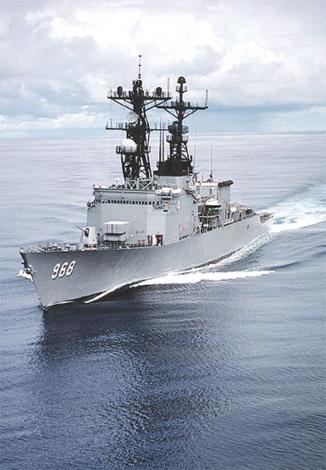 Follow this link for information about the ship’s history:
http://www.navsource.org/archives/05/968.htm

Philadelphia, PA – Delaware Governor Jack Markell and DNREC Secretary Collin O’Mara were joined by natural resource officials from Maryland and New Jersey in Philadelphia on July 29 alongside the ex-USS Arthur W. Radford for a final salute to the destroyer before her final mission into the Atlantic to be sunk as part of the Del-Jersey-Land artificial reef program.

The Radford is expected to leave the dock at the Philadelphia Navy Yard in early August, having been prepared there as the longest ship sunk for reefing in the Atlantic Ocean, through a partnership of Delaware, New Jersey, Maryland and the U.S. Navy. The 563-foot former destroyer will come to rest on the Del-Jersey-Land reef site located 26 miles southeast of the Indian River Inlet and almost equidistant from ports of Cape May, N.J. and Ocean City, Md.

The Radford reefing venture flew a high-profile flag throughout time spent at the dock – as the country’s first multi-state reefing collaboration and more importantly as a boon for the economy of the three states through recreational fishing and diving and for the environment by providing valuable habitat for marine life. Studies have found that artificial reefs offer up to 400 times the food source for fish than is found on average ocean bottom.

Gov. Markell talked about the proud history of the Radford, as well as its promising future, “This ship and its crew members have been all over the world protecting our country. Now, the Radford’s new mission will bring people from across the nation and other parts of the world to our region.”

“Our artificial reefs bring in thousands of fishing and dive trips annually – and that brings in something else we like to see in Delaware: jobs,” Markell continued. “Our team at DNREC is working hard to protect our environment, promote incredible biodiversity through our extensive reefing efforts, and provide special recreation opportunities for families and explorers.”

The Radford reefing has been much-anticipated since Delaware took title to the decommissioned destroyer last year. “It’s not exactly the opposite of a ship’s christening but a celebratory occasion just the same – for the environment and for the economies in this region, for recreational anglers and divers, and most of all for marine life,” said DNREC Secretary O’Mara of the Radford’s reef deployment.

“While there’s been a run-up of great excitement toward the sinking, DNREC’s artificial reef program has really delivered in getting the Radford shipshape for deployment over a relatively short time,” Sec. O’Mara said. “Delaware took title from the Navy last year and after working through the winter, spring and now summer toward environmental readiness and making her more habitat-worthy, the Radford’s at last ready for reefing.”

The ex-destroyer, named for Navy Admiral Arthur W. Radford who served as the commander in chief of the U.S. Pacific Command and chair of the Joint Chiefs of Staff, was commissioned in 1977 and decommissioned in 2003. The Navy announced the availability of the Radford for reefing five years later.

Delaware’s artificial reef program secured the former warship in collaboration with New Jersey and Maryland and contracted with the American Marine Group, a Virginia-based marine towing, salvage and reefing company, to prepare, tow and sink the Radford for deployment as an artificial reef. She will travel downriver on the Delaware, towed by tugs to her final destination, then have her hull and compartments flooded to accomplish the sinking.

Places to recycle your Christmas tree