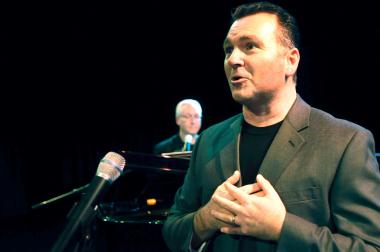 On Tuesday, October 13, at 6 p.m. Clear Space Directors Ken Skrzesz and Doug Yetter will perform An American Songbook in concert at the Rehoboth Beach Public Library. This performance is free to the public and is one of the two concerts that have been offered to the community as part of Clear Space’s kickoff to the new season.

Last Tuesday, September 29, the concert was performed outdoors in Stango Park at the Lewes Public Library. Audience members were thrilled by the performance and many planned on returning to see the concert again at the Rehoboth Beach Library. Maud Banks, a theatre goer that saw the Lewes concert said, “It was such a lovely evening. I wish that live performances of such high quality were offered more frequently. The concert truly warmed our hearts.”

Skrzesz and Yetter have been performing the American Songbook Concert Series, arranged by Yetter, for over 10 years in over a hundred locations throughout the Eastern seaboard. The popularity of the concert is due to the musicianship and communicative skills of the performers aligned with the extraordinary wealth of repertoire of show and popular music created in America in the Twentieth Century. Audiences hear, sometimes for the first time, this music presented with as much energy dedicated to the dramatic structure of each song as to the music itself.

The free concert at the RB Library will include medleys by composers such as Jerry Herman (HELLO, DOLLY!) and Irving Berlin (ANNIE GET YOUR GUN) and includes popular showtunes such as “If I Were A Rich Man” from FIDDLER ON THE ROOF and “Always,” the popular hit from 1924.

Come to the Rehoboth Beach Library on Tuesday evening, October 13, at 6 p.m. for a delightful concert by the beach. For more information regarding Clear Space’s upcoming events and community outreach opportunities.