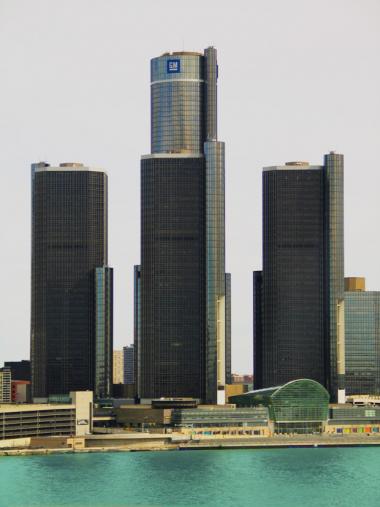 NEW YORK (AP)- General Motors filed for Chapter 11 bankruptcy protection Monday as part of the Obama administration’s plan to shrink the automaker to a sustainable size and give a majority ownership stake to the federal government.

GM’s bankruptcy filing is the fourth-largest in U.S. history and the largest for an industrial company. The company said it has $172.81 billion in debt and $82.29 billion in assets.

As it reorganizes, the fallen icon of American industrial might will rely on $30 billion of additional financial assistance from the Treasury Department and $9.5 billion from Canada. That’s on top of about $20 billion in taxpayer money GM already has received in the form of low-interest loans.

GM will follow a similar course taken by smaller rival Chrysler LLC, which filed for Chapter 11 protection in April. A judge gave Chrysler approval to sell most of its assets to Italy’s Fiat, moving the U.S. automaker closer to a quick exit from court protection, possibly this week.

The plan is for the federal government to take a 60 percent ownership stake in the new GM. The Canadian government would take 12.5 percent, with the United Auto Workers getting a 17.5 percent share and unsecured bondholders receiving 10 percent. Existing GM shareholders are expected to be wiped out.

Administration officials, speaking on condition of anonymity in advance of Obama’s public remarks, said they expect the bankruptcy court process to last 60 to 90 days. If successful, GM will emerge as a leaner company with a smaller work force, fewer plants and a trimmed dealership network.

President Barack Obama is scheduled to address the nation about GM’s future at midday from Washington, and GM CEO Fritz Henderson is to follow him with a news conference in New York.

GM also revealed Monday that it will permanently close nine more plants and idle three others.

The Pontiac, Mich., and Wilmington, Del., assembly plants will close this year, while plants in Spring Hill, Tenn., and Orion, Mich., will shut down production but remain on standby. One of the idled plants will be retooled to build a small car.

Seven powertrain and parts stamping plants will be closed starting in June 2010, while one stamping plant will be idled in a standby capacity.

GM’s filing comes 32 days after a Chapter 11 filing by Chrysler, which also was hobbled by plunging sales of cars and trucks as the worst recession since the Great Depression intensified.

The sale to Fiat means Chrysler could be out of bankruptcy within the government’s original timeframe of 30 to 60 days. Chrysler’s plan gives a 55 percent stake of the new company to a union-run trust for retirees. Fiat gets a 20 percent stake to Fiat that can ultimately grow to 35 percent. The U.S. and Canadian governments get smaller pieces.

The third of the one-time Big Three, Ford Motor Co., has also been stung hard by the sales slump, but it avoided bankruptcy by mortgaging all of its assets in 2006 to borrow roughly $25 billion, giving it a financial cushion GM and Chrysler lacked.

GM will move forward with four core brands – Chevrolet, Cadillac, Buick and GMC – and cut four others. The company plans to cut 21,000 employees, about 34 percent of its work force, and reduce the number of dealers by 2,600. GM said it was finalizing a deal to sell Hummer, and plans for Saturn are expected to be announced within weeks.

“There is still plenty of pain to go around, but I’m confident this is far better than the alternative,” said Sen. Carl Levin, D-Mich. “It’s a new beginning, it’s a rebirth, it’s a new General Motors.”

GM, whose headquarters tower over downtown Detroit, said it believed the filing was not an acknowledgment of failure, but a necessary way to cleanse itself in an orderly fashion of problems and costs that have dogged it for decades.

Trading of GM shares was halted early Monday after they plunged Friday as low as 74 cents, the lowest price in the company’s 100-year history. The News Corp. unit that oversees the Dow Jones industrial average said GM will be kicked out of the index on June 8, along with Citigroup Inc. They will be replaced by Travelers Cos. and Cisco Systems Inc. The index’s rules prohibit it from including companies that have filed for bankruptcy.

The bankruptcy filing represents a dramatic downfall for GM, which was founded in 1908 by William C. Durant, who brought several car companies under one roof and developed a strategy of “a car for every purse and purpose.” Longtime leader Alfred P. Sloan built the global automaker into a corporate icon.

GM first sought help from the Bush administration and Congress last year as it was in the midst of being staggered by $30.9 billion in losses and seeing its cash resources shrink by more than $19 billion.

Consumers, worried about the economy and the future of GM, shied away from the company’s cars and trucks this year even after President George W. Bush promised loans and Obama followed through with billions more in assistance – plus a stiff set of new requirements GM was ordered to meet.

When GM failed to do so by a March 31 deadline, Obama forced out CEO Rick Wagoner and replaced him with Henderson.

Wagoner served at the helm since 2000 and was the face of GM when he first flew on the company jet to ask Congress for aid. After a firestorm of negative publicity, Wagoner rode in a hybrid Chevrolet Malibu from Detroit to Washington for a second set of withering questions before lawmakers.

But that amounted to only a sideshow as the automaker’s financial position worsened. Its revenues plunged almost 50 percent in the quarter ended March 30 and it racked up another $6 billion in losses.

The Henderson-led GM faced a government-imposed June 1 deadline to restructure, slash costs and modify contracts with its union and dealers. But meeting most of those demands, plus a late agreement by many bondholders to swap portions of the $27 billion in debt they are owed for shares in a new GM, were not enough to prevent the court filing.

In fact, it was an all-out sprint to Monday’s filing, as GM quickly sought to nail down deals with its union, bondholders and sell off brands and along with most of its Opel operations in Europe in an effort to appear in court with a near-complete plan to quickly emerge as a leaner company with a chance to become profitable.

The German government on Sunday agreed to lend GM’s Opel unit $2.1 billion, a move necessary for Magna International Inc. to acquire the company.

The Canadian auto parts supplier will take a 20 percent stake in Opel and Russian-owned Sberbank will take a 35 percent, giving the two businesses a majority. GM retains 35 percent of Opel, with the remaining 10 percent going to employees.

In the U.S., the UAW’s ratification of concessions, announced Friday, will save GM $1.3 billion per year. The new deal freezes wages, ends bonuses and eliminates some noncompetitive work rules.

It also moves billions in retiree health care costs off GM’s books. In exchange for its ownership stake, $6.5 billion of interest-bearing preferred shares, and a $2.5 billion note, the trust will take on responsibility for all health care costs for retirees starting next year. Higher health care costs alone accounted for a $1,500-per-car cost gap between GM and Japanese vehicles.

GM will offer buyouts and early retirement packages to all of its 61,000 hourly workers as it plans to shrink overall employment. The company also has about 27,000 white collar employees. In contrast, GM employed 618,000 Americans in 1979, more than any other company.

GM earlier outlined a plan to cut about 1,100, or 40 percent, of its dealers by the end of 2010. It also plans to shed about 500 dealerships that market the Saturn, Hummer and Saab brands.

But just cutting labor and overhead costs won’t be enough to save the company. It also has been working to streamline its engineering and design, as well as standardize many parts so they can go into multiple models.

The once powerful GM earns a place in history as the largest U.S. industrial company to file for bankruptcy protection, and the fourth-largest company overall to do so based on its $82.29 billion in assets.

Lehman Brothers Holdings Inc.’s September 2008 bankruptcy filing is the nation’s largest with $691 billion in assets, and likely served as a catalyst for GM – and Chrysler’s – downfall, as it hastened the erosion of credit markets, making it more difficult for consumers and dealers to finance new vehicles.