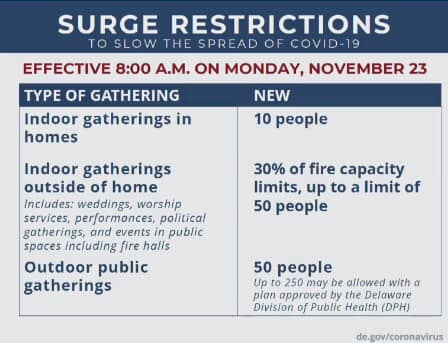 Governor John Carney on Tuesday, November 17  announced additional restrictions statewide to slow community spread of COVID-19, as Delaware and the country experience a surge of cases, hospitalizations and deaths heading into the winter months. The restrictions will be formally issued in a revision to the Governor’s omnibus emergency order later this week.

Governor Carney’s order will include the following restrictions, which take effect at 8 a.m. on Monday, November 23:

The order includes a provision prohibiting Delaware teams from traveling across states lines for tournaments. 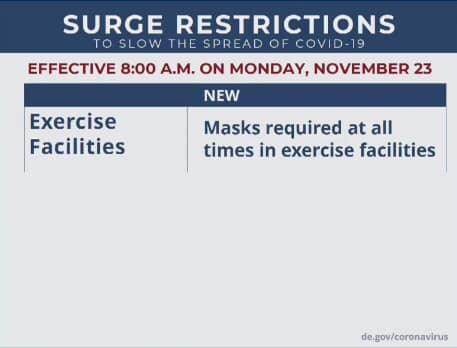 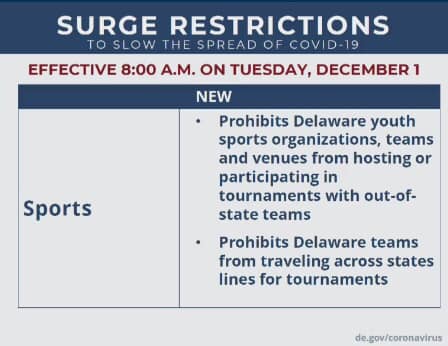 Based on a weekly review of publicly available data, the Delaware Division of Public Health (DPH) continues to recommend that K-12 public schools operate in a hybrid model with a mix of in-person and remote instruction.

Click here to view the letter Senate Minority Leader Gerald Hocker and House Minority Leader Danny Short sent to the governor last week following remarks he made in his Tuesday, 11/10 press conference where he alluded to possible new restrictions. While the leaders share Governor Carney’s concern about the continued spread of COVID-19, they also urged him to consider the negative impact stricter economic guidelines would have on Delaware’s small business community and citizens.