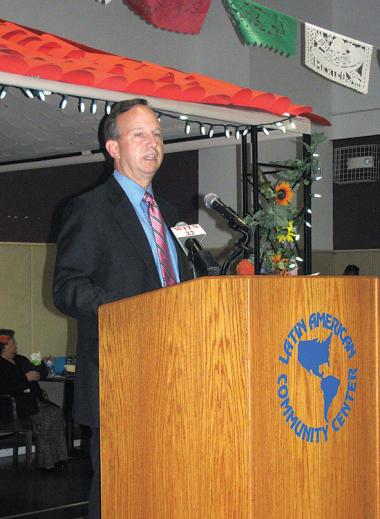 “Members of the Hispanic community have contributed so much to our state and our country,” said Markell. “they have served with honor and distinction in the U.S. Armed Forces and the Delaware National Guard. Hispanic Americans have helped move Delaware forward through their work in areas like law enforcement, healthcare, education, science, art, music, and athletics. I’m proud to be here today to celebrate Delaware’s diverse culture together.”

The proclamation took place at the annual Open House of the Latin American Community Center, also known as El Centro Latino, and was followed by surprise Mariachi music and food representing the traditions of countries across Latin America.

Whereas, Delaware has a long history of welcoming immigrants and becoming home for people from all over the world; and

Whereas, the Hispanic presence in the First State dates back before 1529, with the first mapping of the area that today bears the name of Delaware; the map drawn by Diego Ribero; and

Whereas, Hispanics have served in every conflict since the Revolutionary War, serving with honor and distinction and making invaluable contributions through their service to our country; some have given their all and all have given some.

Whereas, Hispanics have made great contributions to the quality of life in the First State through their work in many fields such as law enforcement, healthcare, education, science, art, music and athletics; and

Whereas, members of Delaware’s Hispanic community have succeeded in finding the delicate balance between retaining their cultural and ethnic heritage while establishing themselves as an integral part of American life; and

Whereas, the Hispanic community shares the core American values of love of family, strong work ethic and religious faith; and

Whereas, Hispanic Heritage Month is the period set aside each year to celebrate the life, work, culture and traditions of Hispanic Delawareans.

In the State of Delaware and urge all Delawareans to join the Latin America Community Center in recognizing the importance of this observance, and the contributions of the Hispanic community to the First State.