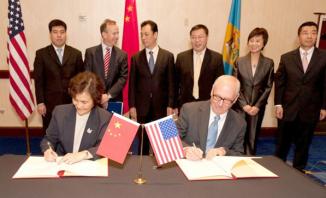 Governor Jack Markell and First Lady Carla Markell hosted more than 70 representatives of Chinese and Delaware businesses today at Buena Vista State Conference Center. The program focused on investment opportunities and the factors that make Delaware an ideal gateway for operations in the United States.

“When companies in China and elsewhere think about setting up manufacturing operations or incorporating in the United States, we want to make sure that they think of Delaware first,” said Governor Markell. “Our responsive government, predictable legal environment, skilled workforce and convenient location make us a great place to grow a company.”

“As a Delaware-based entrepreneur, I experienced firsthand the value that our state offers as a location for operations,” explained Director Levin to the delegation. “Businesses choose Delaware because of our unique combination of advantages.”

The group of more than 40 investors, led by Madam Zhang Yingxin, Deputy Director General of the China Investment Promotion Agency (CIPA) under the Ministry of Commerce, was part of the delegation accompanying President Hu Jintao to the United States.

On Wednesday, Governor Markell formalized a partnership with CIPA to work together with Delaware to provide investors with information on the local investment climate, including policies, regulations and programs. Today’s meeting was the first joint event.

“After the Governor’s trip to China, our trade team worked closely with the China Investment Promotion Association to forge a partnership that would be good for Delaware employers and Delaware workers,” said Secretary of State Bullock. “By cooperating with organizations like CIPA, we hope to cast a wider net to attract more investors and maintain our position as the top destination for U.S. incorporations.”

“This was a wonderful opportunity to welcome the Chinese Delegation to Delaware,” said Senator Carper. “China is a critical trade partner, both for the First State and the United States. Delawares poultry industry is a prime example of the importance of exporting to China. Our chicken producers count China as one of our biggest foreign customers and U.S. poultry products are a major staple of the Chineses diet. After todays meeting, I hope to continue to work with my colleagues in Delaware, Congress and the Administration to build and strengthen our trade relationship with the Chinese.”

“In business, you often find that government can create problems or obstacles for your success. We have found that in Delaware the government is a reliable partner, often helping you capture opportunities and helping to solve problems,” said John Riley, a senior manager from Ashland Hercules.

This event follows the announcement by U.S. Secretary of State Hillary Rodham Clinton on Wednesday of an initiative focused on promoting engagement between Chinese and American subnational governments, including states and cities. Secretary Clinton invited Governor Markell to witness the signing of the agreement in recognition of Delaware’s efforts to establish trade and cultural links with China, including the partnership with CIPA and today’s activities.

As the United States and China continue to build stronger government-to-government ties, there is a growing awareness in both countries that increased cooperation at the subnational level will strengthen our bilateral relationship and benefit both our countries. At the second round of the Strategic and Economic Dialogue in May 2010, the United States and China pledged to enhance bilateral economic cooperation at the subnational levels.

U.S. subnational leaders have been actively engaged in China for the past 10 years. In 2010 alone, there were at least eight governors who led trade delegations to China and more than 100 visits by various Chinese provincial officials to the United States. U.S. and Chinese state and local governments have established numerous cooperative relationships, from 36 sister provinces and states and 161 pairs of sister-cities to university exchanges to EcoPartnerships on energy and environmental cooperation.

Initiative to Strengthen U.S.-China Subnational Cooperation: To build on and strengthen the efforts of these subnational leaders, the Department of State, through the Office of the Special Representative for Global Intergovernmental Affairs (S/SRGIA), the U.S. Mission in China, and the Bureau of East Asian and Pacific Affairs (EAP), is helping states and municipalities to increase and deepen economic, cultural, and educational ties with China. This initiative seeks to develop a platform to provide structure for engagement, allow deeper and more comprehensive dialogue and exchange, and produce tangible and enduring benefit for states, provinces, and cities. With these exchanges, state and local governments will not only be able to share ideas and best practices and advance their own interests through increased trade and investment, but they will also be advancing the priorities of the United States.

The U.S.-China Governors Forum: During President Hu’s visit, the U.S. and Chinese governments will officially endorse the subnational initiative. Secretary Clinton and Foreign Minister Yang will sign a Memorandum of Understanding Concerning the Establishment of a U.S.-China Governors Forum to Promote Subnational Cooperation. This U.S.-China Governors Forum will be co-convened by the National Governors Association (NGA) and the Chinese People’s Association for Friendship with Foreign Countries. It will serve as a platform to promote peer-to-peer exchanges between U.S. state governors and Chinese provincial party secretaries and governors on topics of mutual interest such as trade and investment, energy and the environment, and people-to-people exchanges in the fields of tourism, education, and others as appropriate. In February 2011, the Party Secretary of Hunan province will lead a delegation to the NGA’s winter meeting in Washington, D.C.

The U.S. Departments of Commerce and Treasury are partnering with the National League of Cities on a complementary initiative to promote subnational cooperation. This U.S. China Metro Growth Initiative is focused on sharing best practices on issues such as local economic growth and development and will take place in Seattle, WA in late April.