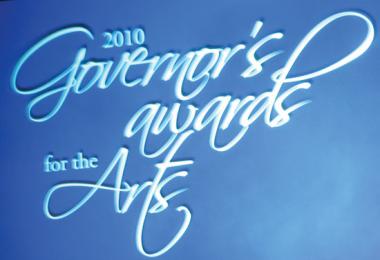 “This people we recognize tonight have improved the quality of life four us all”, said Gov. Markell at the 2010 Governors Awards for the Arts.
The event was held on October, 4 at the Schwartz Center for the Arts.

Last night Governor Markell presented awards to the recipients of the 2010 Governor’s Awards for the Arts at the Schwartz Center for the Arts in Dover.

Approximately 200 people attended the event to help celebrate the contributions of the arts to our lives and to our communities.

Governor Markell’s comments touched on his own experience seeing how the arts have changed people’s lives, citing a young man whose life was directed to a different path while at Ferris School for Boys through a program with the Delaware Theatre Company.

He also referenced an incident in Washington, D.C. where the internationally renowned violinist Joshua Bell played his instrument in the L’Enfant Metro station during rush hour – a cultural experiment planned by the Washington Post.

As he played people rushed to work, a few stopped to listen, but the most interesting result was that without exception, every child who passed by wanted to stop and listen.

Governor Markell suggested that maybe we all need to learn a lesson from the children. Highlighting the evening’s entertainment was a skillful performance by Nathan Lowman, a violin student from the Music School of Delaware.