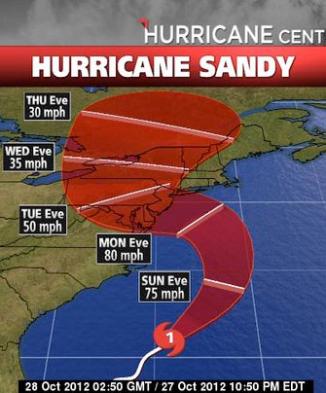 Wilmington, DE – Governor Jack Markell has ordered a mandatory evacuation of coastal communities for Sussex, Kent and New Castle counties, along with a flood-prone area in western Sussex County.

Under the Governor’s order, the mandatory evacuation period for people to leave the designated evacuation areas will begin tonight, Saturday, October 27, at 8 p.m. and end at 8 p.m. tomorrow, Sunday, October 28. Due to the increasingly severe weather conditions that are forecast to begin late tomorrow night, Sunday at 8 p.m. should be the end of evacuees’ travel period, not the beginning.

To facilitate the mandatory evacuation, a limited state of emergency will begin statewide at 8 p.m. tonight, Saturday, October 27. The state of emergency that will begin tonight does not include any driving restrictions or bans, nor does it require business closures. Those measures, should they become necessary, will be announced as storm progresses and conditions worsen.

“While the predicted track of Hurricane Sandy has shifted a number of times over the last 24 hours, it has become clear that the state will be affected by high winds, heavy rainfall, and flooding, especially along the coastline for a several day period. These factors, along with the potential for power outages, have convinced me that the prudent thing to do is have people leave most of our coastal communities,” Gov. Markell said.

Shelters in all three counties will open Sunday at noon for those who need them. Anyone needing the shelters should not evacuate their homes until noon on Sunday.

“Those who come to the shelters need to be aware that the shelters provide is space on a floor and some basic food. There are only cots for the elderly and those with special needs. People who evacuate to one of the shelters should bring sleeping bags, pillows and blankets, as well as books and games or other items to keep themselves and their families occupied,” said Jamie Turner, director of the Delaware Emergency Management Agency.

Recommended evacuation routes can be found at http://deldot.gov/information/projects/tmt/evac_map.shtml. Please note that it is recommended that those in Sussex ocean communities south of the Indian River Inlet travel west along major arteries (Routes 26 and 54) to U.S. 113 to leave the area rather than north on Route 1.

Residents who have evacuation questions may contact their respective local emergency operations centers:

The Delaware Helpline at 1-800-464-HELP (4357) will also activate Sunday at 8 a.m. for hurricane information. The Hurricane Sandy Delaware Information Line is also available at 302-632-7060. Residents are encouraged to check-in on the elderly.

The areas subject to mandatory evacuation, which are based upon recommendations by county emergency directors, are listed below. Attached are maps for New Castle and Kent Counties showing the general area of evacuations, though the list below is more detailed. Also attached is a map generated by Sussex County of possible flooded areas.

Mayor Baker has announced separately an evacuation for flood-prone areas of the City of Wilmington.

The state will open seven shelters at 12 noon on Sunday:

No decision has been made at this time about state government closure for Monday or Tuesday.