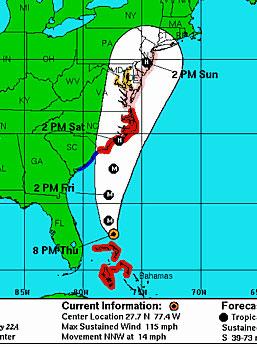 As of 6:00 p.m. a State of Emergency is issued for the state of Delaware and Governor Jack Markell has ordered a mandatory evacuation of visitors (non-residents) along Delaware’s coastal areas and is strongly urging residents with the ability to leave beach communities to depart as soon as practically possible and take shelter with friends or family inland.

Given the track and intensity of Hurricane Irene, mandatory evacuations of coastal area residents are highly likely.

The Emergency Order is pasted below.

Shelters in the state will open tomorrow morning and a list of shelters will be issued this evening.

During a 4:45 p.m. news conference with reporters, the Governor made the following remarks.

Over the last day, forecasts from the National Hurricane Center have moved the projected track of Irene closer and closer to the Delaware coast. The current forecast has the center of the hurricane passing literally a few miles off our coast. What that could mean for us, based on the current forecast is:

§ More than a foot of rain along the coast, with up to 9 to 10 inches inland Sussex and in Kent and New Castle Counties.

§ In the area of Rehoboth and Lewes, sustained winds over 50 with gusts of more than 60.

§ Inland Sussex and Kent and New Castle can expect sustained winds of more than 40 miles per hour in some places.

§ There will be two high tides – Saturday evening and Sunday morning — and those will already be higher than normal because of the moon cycle,

§ A storm surge of 4 to 7 feet is possible along the coast, with 3 to 5 feet in the Delaware Bay.

Earlier today, DEMA issued a warning that visitors who had been planning to come to Delaware beaches change their plans and that those in vacation homes consider returning to their homes. And now, as a result of the expected conditions I just described, in the next few hours I will be declaring a state of emergency as of 6 p.m. that includes an order of evacuation from coastal areas throughout the state. For tonight, that evacuation includes the following:

§ Any visitors to the area should evacuate immediately.

§ Others, including residents, who have the flexibility and ability to begin leaving the areas tonight should do so.

§ People should not be entering the area tonight or tomorrow.
Evacuation is best accomplished along pre-designated routes that are posted with evacuation route signs and can be found of DelDOT’s website. DelDOT along with the State Police and the National Guard will help direct the evacuation traffic on Friday.

We urge people who can to start moving as soon as possible in order to minimize traffic issues that we know we may encounter. Once winds reach 40 miles an hour, which is expected Saturday afternoon, DelDOT, State Police and other responders will not be able to be out on the roads safely and there is the possibility that bridges over the C&D canal will need to be closed to travel.

We will continue to watch the forecast may well order a mandatory evacuation of residents on Friday, as well as closure of state government.

§ Shelters will be opened not only in Sussex but in Kent and New Castle counties as well on Friday and those locations will be publicized. Those locations should be considered a last resort and will be expected to fill quickly. People are advised to make plans to stay with family or friends or in hotels wherever possible.

The Delaware National Guard is activated all of its employees to help with the evacuation as well as storm response. Equipment and troops will be deployed to all three counties for the storm and its aftermath.

I am ordering this evacuation for a number of reasons:

1. The winds predicted for southeast Sussex have the potential to cause severe damage to homes and businesses and jeopardize lives.

2. The flooding that will result from the combination of rainfall and tidal conditions in coastal Sussex and Kent counties will isolate many homes and businesses, making them impossible to reach including by emergency responders.

While only part of the state is covered by the evacuation, everyone in Delaware needs to pay attention to and prepare for this storm. River and stream flooding may be at record levels. People should stockpile food, food batteries and other supplies in case of extended periods of not being able to travel or being without power. Those in flood prone areas should prepare evacuation kits and be ready should rivers or streams threaten their homes.

The Delaware Emergency Management Agency has led dozens of calls over the last three days preparing for this storm, coordinating with federal county, city and town, fire department, health, utility and other agencies. The Emergency Operations Center in Smyrna where I will be tomorrow morning will be fully staffed through the weekend with all of the agencies I mentioned to provide a coordinated response to whatever Hurricane Irene brings.

WHEREAS, over the last 24 hours, forecasts from the National Hurricane Center have moved the projected track of Hurricane Irene closer and closer to the Delaware shoreline, with the most recent forecasts projecting that the center of the hurricane will pass along Delaware’s coast; and

WHEREAS, Hurricane Irene is expected to cause heavy rain, severe winds, high tides and flooding, and has the potential to inflict significant damage and create unusually dangerous conditions in the State of Delaware; and

WHEREAS, the effects of this storm system threaten public safety; and

WHEREAS, it is necessary to pre-stage and potentially deploy resources and assets of the Delaware National Guard in anticipation of responding to any such threat to public safety; and

WHEREAS, based upon evidence presented to me by the Delaware Emergency Management Agency (“DEMA”), I have found that there is an imminent threat of an emergency in New Castle, Kent and Sussex Counties.

NOW THEREFORE, I, JACK A. MARKELL, pursuant to Title 20, Chapter 31 of the Delaware Code, do hereby declare a State of Emergency for New Castle, Kent and Sussex Counties, Delaware effective Thursday, August 25, 2011 at 6:00 PM EDT and lasting until further notice. The nature of the emergency is the imminent threat of flooding and other potentially dangerous effects caused by Hurricane Irene.

Along with such other actions authorized by Title 20, Chapter 31 of the Delaware Code, I hereby order that:

1. All non-residents located in the following areas (“Evacuation Areas”) shall evacuate, effective immediately:

All other locations within three-quarters of a mile of a major waterway in eastern Sussex County, including Delaware Bay and the Atlantic Ocean, Rehoboth Bay, Indian River Bay, Little Assawoman Bay, and Pepper Creek.

All other locations within three-quarters of a mile of a major waterway in eastern Kent County.

3. I hereby reserve the right to add areas to the Evacuation Areas and otherwise modify the scope of the evacuation without further written order. The list of designated evacuation areas and shelters shall be maintained by DEMA and posted to the DEMA website.

4. All Departments and Agencies of the State of Delaware shall assist in such response, recovery and sheltering activities as may be required in the areas of New Castle, Kent and Sussex Counties affected by the storm system. Such efforts shall be directed by and in coordination with DEMA.

5. All Departments and Agencies of the State of Delaware shall work with county and municipal governments to designate evacuation areas and location of shelters.

6. Upon request by local authorities in impacted areas of New Castle County, Kent County and Sussex County, the Delaware National Guard shall take such precautionary or responsive actions as shall be directed by the Director of DEMA, in consultation with the Secretary of Safety and Homeland Security.

7. Effective immediately, state and local officials are directed to remove abandoned vehicles from roads in the State of Delaware at the expense of the vehicle owner. Driving is not restricted at this time; however, residents are advised that driving restrictions may be put into place as conditions warrant.

8. The Delaware Department of Transportation and the Delaware State Police, in consultation with DEMA and the Secretary of Safety and Homeland Security, are hereby authorized to order such bridge and road closures as necessary to protect the health and safety of the public.

9. DEMA shall activate the State Emergency Operations Plan and cooperate with federal authorities, including the Federal Emergency Management Agency in making application, if necessary for relief and assistance for those towns and communities adversely affected by this emergency, pursuant to the Delaware Emergency Operations Plan and any potentially applicable federal disaster or emergency relief laws, including but not limited to the Stafford Disaster Relief and Emergency Assistance Act.

11. I hereby reserve the right to take, or direct state or local authorities to take, without issuance of further written order, any other necessary actions authorized by Title 20, Chapter 31 of the Delaware Code to respond to this emergency.