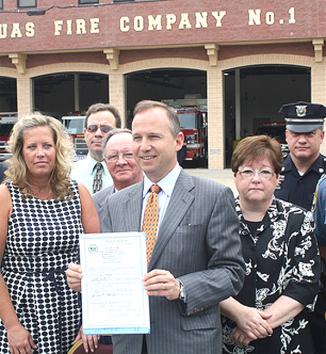 “Too many families have lost loved ones to the senseless and preventable crime of drunk driving, including my own cousin, who was killed by a drunk driver,” said Governor Markell. “Everyone can make a decision about whether they are fit to drive before they stick a key in the ignition.  It’s a stupid, senseless decision to get behind the wheel drunk.”

The bill are the culmination of work by the staff from Governor’s Office, Attorney General Beau Biden’s office, the Delaware Criminal Justice Council, and members of law enforcement including the Delaware State Police, Delaware Police Chiefs’ Council and sponsoring legislators.

House Bill 168, sponsored by Representative Helene Keeley of Wilmington South and State Senator Patricia Blevins of Elsmere, increases penalties for serious repeat offenders, while at the same time providing treatment for those who need it most. Multiple offenders now face the possibility of more time behind bars.

“Many of us have seen in the press reports of people being arrested for their fifth, sixth and even seventh DUI. In fact, since we passed these bills in June, at least two people have been arrested in Delaware for their sixth DUI,” said Representative Keeley. “These repeat offenders are putting thousands of innocent people on the roads at risk and are a danger to society. Strengthening the penalties and requiring more intensive treatment and monitoring will help save lives by keeping dangerous drivers off the road, and hopefully these drivers will get the help they need to not drive drunk again.”

Senate Majority Leader Patricia Blevins said the new law strikes a good balance between tougher penalties and getting problem drinkers help.    “If you’re up for your third DUI, you’re an alcoholic, no two ways about it,” she said. “And to keep our highways safe, you need to be off the road receiving help and treatment. The treatment component of this new law is going to not only make our highways safer, but also will help people start the process of rebuilding their lives.”

“Creating a new criminal offense is something we don’t do lightly,” said Blevins, chair of the Senate Judiciary Committee, said regarding HB 174. “But this new law recognizes the need to deal with people who, through criminal negligence, turn their cars into weapons and hurt people. It also brings other sections of the law into alignment and, most importantly, gives our judges the ability to develop sentences that fit the crimes.”

“A car becomes a deadly weapon when an impaired driver gets behind the wheel, and taking those drivers off the street is our top priority,” said Attorney General Biden. “But arresting habitual DUI offenders over and over again clearly does not address the underlying problem. The new law will help offenders stay sober and stop driving impaired, and most importantly, keep innocent Delawareans safe. I’d like to thank Governor Markell, Senator Blevins and Representative Keeley for their advocacy and hard work ensuring these bills become law.”

“Sometimes, bad things happen to good people though no choice of their own and sometimes people make bad decisions by making a conscious choice to get behind the wheel of a car after drinking,” said Lew Schiliro, Secretary of the Delaware Department of Safety and Homeland Security. “Today’s message is that making that choice to drink and drive is going to have serious consequences. While there are many things in life that we cannot change, we can and must change the decision to drink and drive.”