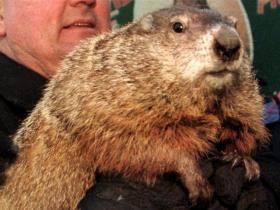 February 2, 2009 – The legendary groundhog made his annual prediction early Monday after seeing his shadow.

Since 1886, Phil has seen his shadow 97 times, hasn’t seen it 14 times, and there are no records for nine years, according to the Punxsutawney Groundhog Club. The last time Phil didn’t see his shadow was in 1999.

The Groundhog Day forecast for the Punxsutawney, Pennsylvania, area suggests Phil will have trouble seeing his shadow. The National Weather Service predicts mostly cloudy weather for the area.

Thousands of people descend on Punxsutawney, about 65 miles northeast of Pittsburgh, each year for the tradition.