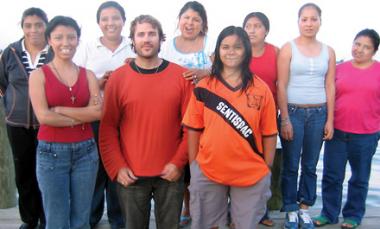 REHOBOTH, DEL–Hands of Harvest, a 56-minute documentary about the relationship between watermen who make a living on the Eastern Shore and the Mexican women who pick blue crabs, will air on Maryland Public Television on Tuesday, July 6, at 10 p.m.

“We are thrilled that public television thought enough about the project to broadcast it,” says Haley, who met Muys when Haley had a small role in Muy’s film Bloodsworth, a collection of vignettes about Bloodsworth Island in the Chesapeake Bay. “As a restaurateur, I use a lot of Hispanic workers, and I care about the conditions that they live and work in and how they are treated in the community.”

Haley is on the board of La Esperanza in Georgetown, Del., which was founded to support immigrant workers. To date, La Esperanza has provided services to more than 75,000 clients.

Hands of Harvest in March was shown at the Milton Theatre to a sold-out crowd. “The blue crab industry is of interest to people all across the Delmarva Peninsula and the Eastern Shore—it’s an institution,” Haley says. “Many don’t realize how dependent this struggling industry is on Hispanic workers and what their life is like here.”

Muys profiled a plant where the pickers are from the same area in Mexico. “They have the same family values,” Muys says. “They know each other from family connections.”

Muys, who lives in Washington, D.C., grew up vacationing in Rehoboth Beach and the Eastern Shore, where his family has a house. Today he runs a film company, Chapel Cove Productions, which makes documentary films for organizations.

Haley next will produce Motorcycle Chang pawith Dirt Track Productions. The Chang pa is a nomadic tribe living in the Changthang, a high altitude desert in the Himalayas. Haley recently spent time on a motorcycle trip with Gaurav Jani, the movie’s director.