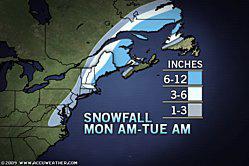 State College, Pa. — 2 March 2009 — AccuWeather.com reports New Englanders will bear the brunt of the major snow today, while a few more inches of snow will be delivered to the Interstate-95 corridor from Washington, D.C., to New York City. Very cold, strong winds will cause trouble for the major Northeast cities long after the snow has ended.

Travel-Impairing Snow for the Northeast

The heaviest snow will push northward from southern New England to northern New England and Atlantic Canada today. An additional 6-12 inches of snow is still expected to fall from extreme northern Massachusetts through eastern Maine. Low visibility and snow-covered roads will make travel treacherous across most of New England.

Boston could be covered by an additional three to six inches of snow today, which would bring the total up to a foot.

The mid-Atlantic was already pounded by the heavy snow overnight. Philadelphia and Atlantic City had a break from the snow early this morning, which may have allowed the plows to get a head-start on clearing the roadways. According to the Associated Press on Sunday night, the Pennsylvania Department of Transportation was planning on using 400 trucks and more than 70,000 tons of salt to prepare for the snow in the Philadelphia area.

A lull from snow in New York City this morning may allow for an easier morning commute. A second round of snow impacting the Washington-Baltimore corridor will push northward through the morning. An additional 1-3 inches of snow will fall in New York City and Philadelphia today, where totals will reach as high as 10 inches. The highest amounts will lie to the east of these cities.

The mid-Atlantic had previously been missed by many of the winter storms this year, especially in the Washington, D.C., and Baltimore metropolitan areas. The nation’s capital has already received the heftiest snowfall of the year from this storm and will have another 1-3 inches before the storm wraps up by midday.

Flight delays and cancellations are likely in many of the major airports of the Northeast, leaving some stranded. Activities and school delays and closures are also probable today.