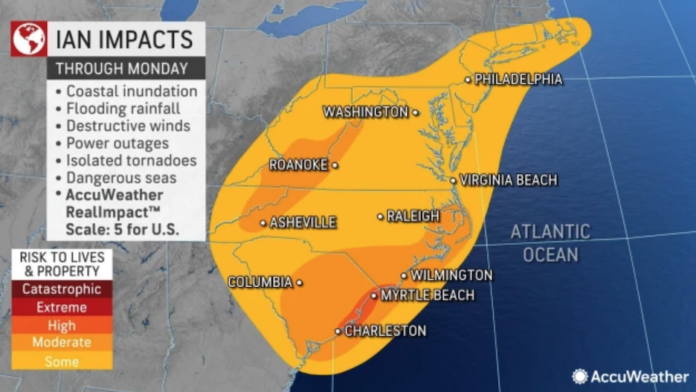 AccuWeather Hurricane Center – September 30, 2022 – Ian was bearing down on the South Carolina coast Friday as a Category 1 hurricane with maximum sustained winds of 85 mph. The storm’s winds and rain were becoming more prevalent in the Palmetto State as Ian swirled offshore.

AccuWeather meteorologists warned that despite being rated lower on the Saffir-Simpson Hurricane Wind Scale than when it slammed into Florida with deadly consequence, Ian will still pack a punch and unleash life-threatening impacts as it makes landfall Friday afternoon.

Hurricane-force winds extended outward from Ian’s center to 70 miles out and its tropical-storm-force winds reached as far as 485 miles out from the center, mainly to the north of the center. Satellites showed that Ian’s cloud shield stretched as far away as Pennsylvania and New England.

“Ian’s structure is similar to that of a powerful nor’easter, with most of the storm’s rain and wind focused to the north and west of the center,” AccuWeather Hurricane Expert Dan Kottlowski said. “But, make no mistake, Ian will hit with the force of a hurricane in the Carolinas, especially along the upper half of the South Carolina coast.” 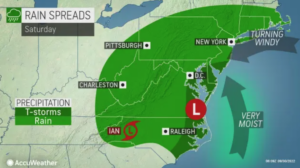 People should remember to check the AccuWeather Hurricane Tracker in their  AccuWeather app or AccuWeather.com to follow start and end times for storms, understand vital forecasted impact details for their location such as peak winds, total rainfall, rainfall amount probability graphs, hourly wind and rainfall charts and impact maps of storms as they develop. If the immediate location in view will not be threatened by a hurricane, a list of impacted cities will be made available to raise awareness of what locations are at risk.

AccuWeather, recognized and documented as the most accurate source of weather forecasts and warnings in the world, has saved tens of thousands of lives, prevented hundreds of thousands of injuries and tens of billions of dollars in property damage. With global headquarters in State College, PA and other offices around the world, AccuWeather serves more than 1.5 billion people daily to help them plan their lives and get more out of their day through digital media properties, such as AccuWeather.com and mobile, as well as radio, television, newspapers, and the national 24/7 AccuWeather Network channel. Additionally, AccuWeather produces and distributes news, weather content, and video for more than 180,000 third-party websites.